Newly-translated fragments from the medieval store of documents known as the Cairo Geniza have gone on display to the public in Cambridge and can be seen until October 2017. They deal with everything from business to aphrodisiac recipes. The Times of Israel reports (with thanks: Lily): 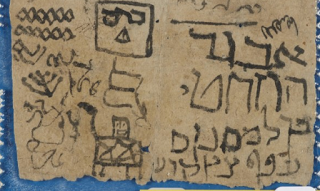 An 11th century child’s alphabet and doodles from the Geniza

Among the highlights of the exhibit are the scratchings of a young student first learning the Hebrew alphabet, with doodles in the margin; an 11th-century prenuptial agreement requiring an unruly would-be groom to curtail his future behavior; letters and treatises written in Maimonides’ hand; and one of the earliest known examples of an engagement deed, from the 12th century, ensuring brides-to-be wouldn’t be locked into a dormant marriage if their husband disappeared while traveling overseas.

He said it was a challenge to select items from the “colossal material” at the university’s disposal and present it in a compelling way to a general audience. “We didn’t want to paint either a picture of a happy interfaith utopia, where Jews lived happily under Islam and there were no problems; on the other hand we don’t want to paint the picture that is popular with some of the right wing press in this country, for instance, of dhimmi suffering under the oppression of the cruel Muslim government,” he said.

More about the Geniza