TOP NEWS
http://jewishrefugees.blogspot.com/2020/11/exceptional-sassoon-treasures-to-be.html
Got a million dollars to spare? You might like to spend the money on a sumptuous Torah silver and gilt breastplate. This and other treasures from the collection of the Sassoon family, the Baghdadi Jews who established a business empire from India to the Far East  – will be going to auction at Sotheby’s in New York in December. Other items include an annotated siddur and the tefillin belonging to the Ben Ish Hai, and a rare handwritten work by Maimonides copied by Yemenite scribes in the 15th century. The 12th century Farhi bible is not up for sale.  The Jewish Chronicle reports (with thanks: Alain): 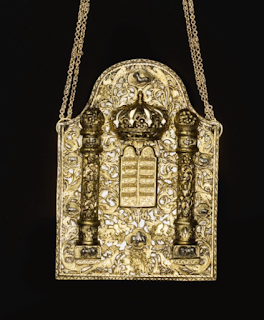 A Torah breastplate, expected to fetch between half a million and 800,000 dollars at auction

Prized artefacts from the Sassoon family collection will go on sale in New York this December, including two pieces billed as the most important pieces of Judaic metalwork to be brought to auction in a generation. Sixty eight pieces from the Sassoons – known as the “Rothschilds of the East” – will include rare silvers, Hebrew manuscripts, textiles dating from the 11th to the 20th centuries.

The centrepieces of the lot will be two highly decorative 18th century silver Torah shields which originate from Lviv in modern-day Ukraine and, according to the auction house, Sotheby’s, can be attributed to Jewish silversmith Elimelekh Tzoref. When a similar shield was sold in Tel Aviv in 2000 it achieved the then record-breaking price of almost $800,000 (£927,000 today).
Also on sale is a Siddur once owned by Rabbi Joseph Hayyim, a 19th century master kabbalist and halachic authority for Iraqi Jewry – expected to fetch up to $200,000 (£153,000). Rabbi Hayyim’s tefillin – said to be the only ones known to still exist – will also be on offer.
“The exceptional pieces in this sale are treasures of one the world’s greatest Jewish dynasties and significant works of art which tell an important story of Jewish patronage, collecting and scholarship at the highest level,” said Sharon Liberman Mintz, Senior Consultant of Books and Manuscripts at Sotheby’s.
“Not only are the Silver and Hebrew manuscripts some of the finest objects to ever come to market, they are further distinguished by their unparalleled provenance to generations of members from this legendary family.”
Read article in full