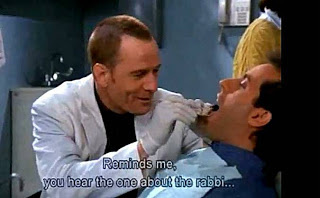 In one of the most famous Seinfeld episodes (the Yada-Yada,) Jerry is upset when he thinks that his dentist converted to Judaism just to be able to tell Jewish jokes.


I was reminded of that by this story:

A New York man who claimed he was the target of anti-Semitic graffiti was arrested on Monday on suspicion that he daubed the swastikas on his home himself.

Andrew King, who says he is Jewish, reported to police on February 10 that vandals had drawn two swastikas on the wall of his house in Schenectady, in upstate New York. He said that he was clearing snow from his driveway when he saw the symbols.

“Just a vein of fear went right through me,” King told the Daily Gazette at that time. “All that history attached to that Nazi symbol.”

However, after investigating the claim, police concluded that King himself painted the swastikas and the 54-year old was arrested on the charge of reporting a false crime.

The rabbi of the local synagogue, Congregation Gates of Heaven, told BuzzFeed News that he had known King for a decade, but that the man had never converted to Judaism.

There have also been people who falsely claim to be Jewish just to be able to give extra emotional power to their anti-Israel activities.

So while very few people actually want to be Jewish, a lot of people want to be “As-A-Jews.” There are lots of benefits to pretending to be Jewish without the irritating parts of actually knowing anything about Judaism or feeling obligated to uphold any Jewish laws.

Maybe it is time to create a new religion, AsAJudaism. Joining is as easy as prefixing any self-serving statement with “As a Jew…”