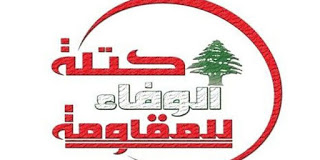 The Hezbollah mouthpiece Al Manar writes about a meeting of the terror group’s political bloc in Lebanon:

The “Loyalty to the Resistance” parliamentary bloc held its periodic meeting Thursday in its Haret Hreik-based office, under the chairmanship of MP Mohammad Raad. stressing that it deals positively with the initiatives aimed at helping Lebanon carry out the needed reforms.
In a statement issued after the meeting, the bloc said that it was keenly following up on all efforts aimed at assisting the Lebanese authorities , on top of which the initiative of French President Emmanuel Macron.
“In light of our commitment to and keenness on national sovereignty, we are dealing positively with the initiatives of brothers and friends, with the purpose of helping Lebanon make reforms and achieve developmental projects, in a way that preserves our independence and protects our people’s dignity,” the statement read.
…
Hezbollah bloc also blasted the UAE-Israel agreement aimed at normalizing their mutual ties and sponsored by the US, denouncing the Zionist settler policy in the occupied Palestinian territories.

Talk about being tone-deaf! The Lebanese people want leaders who will ensure that the country is run responsibly, and Hezbollah can’t help but to condemn Israel on topics that have zero relevance to the Lebanese.
It is too early to say that Hezbollah’s position in Lebanon has been permanently weakened, but since the Beirut blast the group has been attacked in rallies and on social media. Any claims Hezbollah ever had to be working for the Lebanese nation and people are regarded as lies.
Condemning Israel and the UAE in a press statement is not a very savvy move, but it is who they are.