The European Council on Foreign Relations has created an extensive website, Differentiation Tracker, solely to determine to what extent different European countries are adhering to UNSCR 2334, the Security Council resolution that called all Israeli sovereignty to the east of the Green Line illegal, including the Kotel and the Jewish Quarter.

Paragraph 5 of that resolution “Calls upon all States, bearing in mind paragraph 1 of this resolution, to distinguish, in their relevant dealings, between the territory of the State of Israel and the territories occupied since 1967.” This website is an exhaustive list of how each EU member is doing that.

So far, there is very little adherence to 2334. Out of hundreds of agreements listed there between Israel and EU countries, only 18 adhere to the resolution – six from the Netherlands, three from the UK and six more from the EU altogether. Here’s what the top of the France section looks like, showing zero compliance 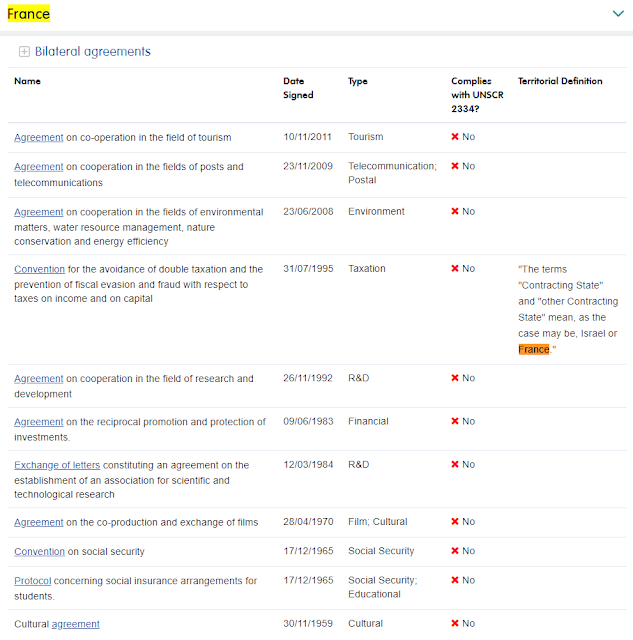 This is an enormous amount of work, and it is only against Israel. No other territorial dispute or case of belligerent occupation has such an elaborate site dedicated to it.

The ECFR is sensitive to that argument of double standards, so it renames it “Whataboutism” and pretends to answer:

Defenders of Israel’s settlement enterprise regularly criticise the EU, and international law advocates more broadly, of a disproportionate focus on the Israeli occupation, to the detriment of other conflict areas. These ‘pro-settlement’ talking points are a mixture of spin and disinformation, ignoring important factual and legal differences.

Nevertheless, it is true that the importance of third state responsibilities, and business and human rights practices, in situations of occupation and annexation remains under-developed. It is also true that what limited implementation there has been tends to be uneven. For example, the EU has been much more diligent in enforcing its non-recognition of Russia’s annexation of Crimea than it has been towards Morocco’s annexation of Western Sahara.

But instead of deconstructing international law to make internationally unlawful actions permissible – as supporters of the settler movement seem to advocate – a more correct approach would surely be to improve implementation and respect across the board. In other words, third states should be doing more, not less, to meet their international law-based duties in all situations of annexation and occupation.

In short – yeah, we do have double standards, and we should do more on other conflicts, but you gottta start somewhere.

The only problem with that logic is that international law is determined by actual state practice as much as it is based on written law. As Eugene Kontorovich remarked about this site, “The ‘rule’ they claim to apply is not written down anywhere. They deduce it from other rules. But int’l law is made by state practice when treaties silent. A rule that applies basically never is not a rule of in’tl law. “

The very fact that the EU created this elaborate site only for Israel while all but ignoring all other similar situations proves that these rules are applied only to Israel, which means they aren’t rules at all.

The site has a FAQ that shows that the entire purpose of the site is to stop putting Europe on the defensive for these very reasons:


The EU must do more to counter Israeli efforts to build up a substantive case with which to put Europeans on the defensive, make EU consensus more difficult to attain, and block stronger EU action on settlements.

But later in the FAQ, when dealing with the differences between the territories and Western Sahara, it says:


There exist a number of significant differences between Western Sahara and the Palestinian territories. For one, there is a lack of consensus in Europe on whether the territory of Western Sahara is indeed “occupied” by Morocco or whether, as non-sovereign administrator of the non-self-governing territory, it is otherwise obligated to protect the people’s right to self-determination.

In other words, Morocco has already managed to destroy EU consensus on Western Sahara – mostly because greedy European countries want to make agreements to grab natural resources from the territory  – so because of European greed, there is no consensus. But there is no EU interest in the resource-weak West Bank so there is more of a “consensus” – and that is the reason the two situations are different.

That has nothing to do with international law.  It means that if Israel convinces an EU member country to follow the lead of the US on the legality of the “occupation” then the EU should drop the entire thing. (Like that will happen!)

The double standards is obvious, and the ECFR knows it quite well.