TOP NEWS
http://jewishrefugees.blogspot.com/2018/04/ethan-katz-muddies-waters-of-muslim.html
Ethan Katz is to give the Maurice Freeman Trust lecture at the Pears Institute for the Study of Antisemitism at Birkbeck College in London on 1 May. He is a history professor at the University of Cincinnati and the author of Burdens of Brotherhood, a study of 100 years of interaction between Jews and Muslims in North Africa and contemporary France. In italics I am reproducing  the blurb advertising Katz’s lecture. I have interspersed my comments.
Headlines from France suggest that Muslims and Jews have renewed an age-old struggle. But the past tells a different story.
Academics like Katz have come under fire for ‘whitewashing’ Muslim antisemitism. They are accused of muddying the waters and confusing the reader/student  with ‘complexity’ where actually, matters might be quite simple. The 100-years war in Palestine it is not a struggle between Muslims and Jews, but a Muslim/Arab struggle against Jews. Prior to the colonial era in the Maghreb, Muslims had power. Jews were a defenceless minority  in an Arab/ Muslim majority country.  All Jews were eventually forced out.There is no equivalence between the two groups. 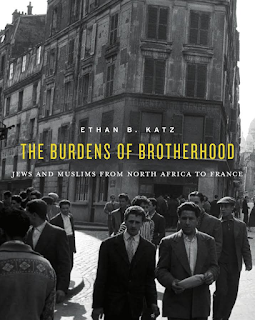 The past Katz work refers to is the comparatively recent past. It fails to delve into the dhimmi status of Jews in the Maghreb before French rule – a history of subjugation and even forced conversion. Then Jews were confined to ghettoes – for their own protection against a hostile population. Jews and Muslims were never brothers – Muslims always assumed they were superior and entitled to wield power over non-Muslims. Both Jews and Muslims in Algeria were offered French citizenship by the 1865 Senatus-Consulte, but the Muslims refused, because it would have meant compromising their personal status.  The constitution of independent Algeria discriminates against Jews, for only a person with a Muslim father or grandfather is entitled to Algerian citizenship. Non-Muslims would never be accepted as part of the Algerian nation, even those who had supported the FLN nationalists.
In this talk, Ethan Katz discusses the findings from his prize-winning book, The Burdens of Brotherhood. He traces the simultaneous development of coexistence and conflict among Jews and Muslims in France across the twentieth century and up to our own time. Katz takes us inside little known relationships between individual Jews and Muslims around common culture and shared interests cafes, concert halls, neighbourhoods, and athletic clubs.
The prominence  given by post-modern academics like Katz to cultural and socio-economic factors over people, historical events and politics has served to falsify the history of Jews from Arab countries. No matter how many cups of coffee they shared with their neighbours, even the most ‘arabised’ of Jews, such as the Jews of Iraq, were eventually driven out. Friendships between Jews and Muslims did not remain immutable – they could turn to enmity at the drop of a hat.
At the same time, he shows how the defining events of the past hundred years – from the rise of fascism and the Holocaust, to the French-Algerian War and decolonization, to the Israeli-Arab conflict and the rise of global jihad – have become increasingly difficult to escape and have had a far-reaching impact on the interactions and mutual perceptions of Jews and Muslims in France.
The underlying assumption is that Jews and Muslims lack any kind of agency, and are buffeted about by external forces beyond their control. However,  the driving force behind the Israel-Arab conflict, for instance,  has always been Arab rejectionism. The  global jihad is the product of an ideological,  anti-modern and antisemitic movement in the Arab and Muslim world. Some ten Jews have been murdered by Muslims in France in the last decade. No Arabs have been murdered by Jews. These murders did not just happen in a vacuum, and cannot be blamed on French colonialism, or economic, civil or social grievances.