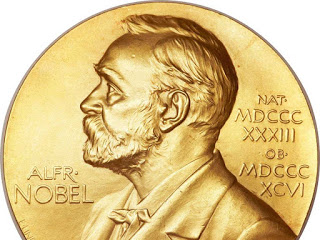 Earlier this year, a far-left member of the Norwegian parliament nominated the BDS movement for the 2018 Nobel Peace Prize. There was a fair amount of publicity for this move, which the BDSers claimed was proof of their importance.

Is it that difficult to be nominated for a Nobel Peace Prize?

Not really. The Nobel Committee has criteria for who can nominate others for the prize, and tens of thousands of people – parliamentarians and university professors in certain fields among them – are qualified.

A friend of mine who happens to be one of those people has officially nominated my blog persona, the Elder of Ziyon, for the Nobel Peace Prize of 2019. (He unfortunately doesn’t want his name published, but you can check that this is true in 2069 when the Nobel records for this year go public.)

Here is his nomination letter to the Nobel Committee. I think you will agree that I am far better qualified to win the prize than the BDS movement is.

Nomination of the Elder of Ziyon for the Nobel Peace Prize

One doesn’t exaggerate in saying that the Israeli-Palestinian-Jewish-Arab- Muslim conflict is among the most protracted, most publicized conflicts in modern history. The previous Nobel Peace prizes given for the Oslo process were perhaps premature but surely well-intentioned, because anyone who makes progress toward resolving that seemingly intractable conflict is surely deserving of the prize. But sometimes that progress may not be so apparent, so visible; sometimes that progress is occurring in unexpected ways. Obviously negotiations are essential, but negotiations cannot make progress, I submit, except in a certain context; and that context is that everyone involved is working within the framework of “truth.” That is, ultimately, the parties (on both sides) must dispense with “narratives,” with “myths,” with “fantasies,” and so on, and recognize the truth, the truth of history, the truth of what is realistic, and so on. Although this is not the place for a polemic, for many decades now (at least since 1948), the conflict has proved intractable because the Arab side has told itself false stories about the legitimacy of Jewish presence in the region and has worked under the belief that it will be possible to remove that presence eventually. Much of the international community, with the United Nations leading the charge, has promoted that false belief by consistently encouraging the Palestinians in particular in their belief that they will “return” and take over the entire region, including what is now the State of Israel. This tactic has created significant intransigence in the Palestinians, and is (in my opinion) the single most important reason that peace—genuine “peace,” which involves mutual recognition of the two sides—has not come. As long as one of the sides seeks the disappearance of the other, peace cannot come. What is necessary, then, is a new tactic. Not one that promotes the falsehoods mentioned above, but one that is single-mindedly committed to the pursuit, and dissemination, of truth.

I can think of no better person who has dedicated his or her work to that pursuit than the journalist and blogger, Elder of Ziyon, whose work can be found at http://elderofziyon.blogspot.com/. Not only has this individual regularly broken crucial and compelling stories, but he has, with laser intensity, pursued the truth about all the key elements of this decades-long conflict: about the Jewish connections to the Land and legitimate presence there, about the relevant wars, about the lies promulgated by the Palestinian side, about the inefficiency (at best), corruption (at medium), and malice (at worst) of international organizations such as the United Nations, about the rampant antisemitism that drives much Western antagonism to Israel etc. Spend some time studying his website, diving through the archives, and you will quickly recognize that you are finally cutting through the lies and fantasies and getting at the profound true roots and causes of this conflict—and it is only by exposing the true roots and causes that there is any hope of getting all the parties, the ones directly involved in the conflict and all the surrounding parties that inadvertently promote the conflict, to make the proper moves toward resolving it.

Not only is Elder of Ziyon maximally deserving of this prize, in fact, but the very awarding of the prize to this individual could itself help promote the peace process—because the recognition it would bring to his work would disseminate it more widely, and thus accelerate the process. Moreover, it would announce and confirm the deeper underlying truth: that true peace is only possible when one is at peace with the truth.

Please consider the Elder of Ziyon for the 2019 Nobel Peace Prize.

I will need to update my business cards to say “Nobel Peace Prize Nominee” – at least until I win.

And a great thank you to my nominator, whose letter to the Nobel Committee is really a wonderful compliment to me.