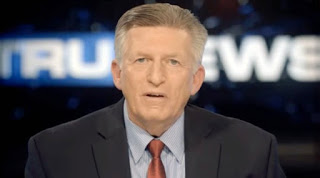 
The White House said on Tuesday that the white supremacist website TruNews was not credentialed to cover press events at the Executive Mansion — hours after two members of Congress sent a letter to President Donald Trump’s acting chief of staff urging him “to condemn the antisemitic comments by TruNews founder and host Rick Wiles and deny TruNews any future access to the White House.”

In their letter on Tuesday to Mick Mulvaney, Reps. Ted Deutch (D-FL) and Elaine Luria (D-VA) asserted that, “Shockingly, published reports suggest that TruNews has participated at press events at the White House, including on Sept. 26, 2018, when President Trump took a question from TruNews during a press conference.”

While I was not the one who discovered the “Jew Coup” episode of TruNews, it had been on the Right Wing Watch website for a couple of days before I started my campaign to make sure TruNews does not cover any White House events going forward.

My tweets about the offensive site received thousands of retweets and “likes.” Soon the Israeli and Jewish media picked up on it, and from there it slowly made it to The Independent (UK)  and a Bari Weiss op-ed in the New York Times.

It seems highly unlikely that the White House will invite these Jew-hating pigs to events any more.

Right Wing Watch continues to follow and report on the reprehensible organization. Last week it reported that TruNews is considered a church by the IRS and therefore does not have to report on its sources of funding. This is a giant loophole that needs to be closed. The “Flowing Streams” church it claims to be part of doesn’t even have a website or a Facebook page, and TruNews describes the church as “a media-centric religious organization that is a pioneer in Christian digital media content production and distribution.  TRUNEWS is the church’s flagship program.”

Meaning, it is a media organization masquerading as a church.

It is hard to believe that there are any congregants, since the church’s address is difficult to find. I found an old address but TruNews claims they bought a building on a ten acre lot, again without revealing its address. There are no social media photos of any sermons or events. The entire idea that this is a church is a scam.

The IRS shouldn’t find it too difficult to discover this for itself.