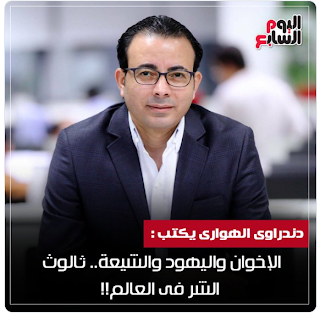 The popular Egyptian news site Seventh Day (Youm7) calls the Muslim Brotherhood, the Jews and the Shiites the “trinity” that is responsible for all world problems.

There is no catastrophe in the world today that is not from one of the sources of evil: the Jewish lobby, the terrorist Brotherhood, and the Shiites with their extremist and armed wings. The evil triad is similar in their approach as if they were born from one womb.

When the Israeli state was founded by Theodore Herzl, it was founded on the basis of religious belief. The same thing happened when the Iranian revolution in 1979 was based on a religious belief, as the exclusive source to speak in the name of Islam.

The Trinity agrees that hostility to Jews is anti-Semitism, anti-Shia is hostility to Al-Bayt Rasulullah (peace be upon him), and hostility to the terrorist Brotherhood is anti-Islam, as if the Trinity were emissaries of heaven to earth to speak in the name of the Lord.

The Trinity does not recognize the term “homeland” in its comprehensive sense, nor do they recognize its geographical boundaries. Iran knows only the “divine state of justice,” which is to dominate the world, and is ruled by the Mahdi, and Israel does not recognize borders and that its goal is to establish Greater Israel from the Nile to the Euphrates. The Muslim Brotherhood is looking for the rule of the world and the application of sharia to the Islamic Caliphate, and that the Pakistani Muslim and a member of the group is better than the Egyptian Muslim not belonging to the group !!

The Trinity is above apartheid. The Jews see themselves as God’s chosen people in general, and within them also racial classes, each with their own characteristics and advantages. For example, Sephardim are different from Ashkenazim, while Falasha Jews are at the bottom of the list of rights, and the same is true among the Shiites ….

The Trinity sanctifies the clergy, rather than the prophets and apostles, and their words are more sacred than the Holy Scriptures. On behalf of the Lord !!

This wasn’t written as an op-ed – this was written by Dandrawy Elhawary, the chief executive editor of Youm7.

Youm7 is the fifth most popular website in Egypt and the 235th most popular one in the entire world. Rabid atisemitism is simply part and parcel of every day life in Egypt.  As of this writing, there were over 500 “Likes’ on Twitter, with many fawning responses on how wonderful this essay is.