Palestinian President Mahmoud Abbas met Saturday with the family of the late Iraqi Jewish writer Yitzhak Bar Moshe in the presence of the head of the committee for communication with Israeli society Mohammed Al Madani.

The President welcomed the writer’s family, stressing that he would reprint the book “Out of Iraq”, which was written by the late writer in Arabic.

Writer Isaac Bar-Moshe was born in 1927 in Baghdad.


During his first decades in Israel, despite the hostile attitude toward Iraqi Jews and the Arabic language, Bar-Moshe was optimistic about the country’s future. That optimism turned to deep disappointment. Perhaps paradoxically, it was after Egypt and Israel signed the Camp David Peace Accords in 1979 that Bar-Moshe realized, he said later, that Israel was not interested in living in peace with the wider Arab world. The assassination of Yitzhak Rabin in 1995 was the final nail in the coffin of his hopes for Israel. He left the country permanently, moving to England and settling in Manchester, where there was a thriving Iraqi Jewish community. “I felt,” he said in a 2003 interview, “that I did not belong in Israel.”

Apparently, Abbas wants to show a kinship with Bar Moshe because some of his autobiographical writings can be twisted to look anti-Israel. However, they were far more nuanced: 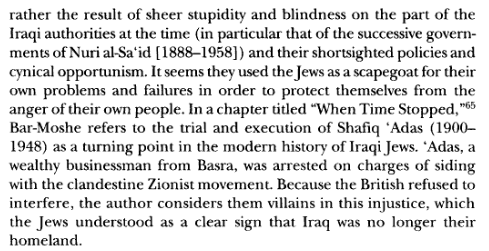 Bar Moshe’s relationship with Israel was complex, but Abbas wants to portray it as an example of Israel’s hate towards Arab Jews to combat his own reputation as an antisemite.