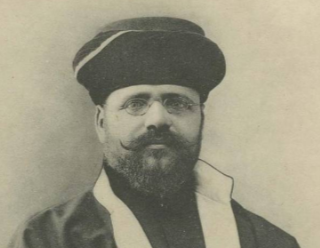 An Egyptian site has an article about “The story of the Jewish rabbi who refused to leave Egypt and criticized Zionism.”

On December 21, 1956, Haim Nahum, the Chief Rabbi of the Jews in Egypt, issued a statement denouncing the triple aggression against Egypt, and published by Al-Ahram newspaper.

“We once again wish to join our citizens in condemning the brutal British-French British aggression against our dear homeland Egypt, and we extend to the Almighty the warmest calls for the glory and well-being of Egypt and the happiness of all its people.

“Egyptian Jews are an integral part of the Egyptian nation, and they enjoy all that is enjoyed by the good Egyptian citizen. Therefore, no foreign country, whether it is Israel or any other country, has the right to speak for themselves, since the Egyptian Jews are Egyptians First, they share their patriotic sense of patriotism. “

The rabbi was a popular and respectable figure in various political, cultural and popular circles. When the establishment of the so-called “Israel” was announced,  he refused to immigrate to it. He thought that those who migrated from Egypt were foreign Jews. The Egyptian Jews were not required to emigrate. .

There is a bit more to this story.

Rabbi Haim Nahum Effendi was actually chief Sephardic rabbi of Egypt and as such he was a Senator of Egypt’s Legislative Assembly. He was remarkably well educated and a true scholar.

As far as how he led his Jewish community in the face of Arab antisemitism:

The community of which Rabbi Nahum served as religious leader started to feel uneasy and unwelcome with the rise of Arab nationalism, the rebellion against colonial British authority in Egypt, and the support of Egypt for the Arabs of Palestine. Under the terms of the “Company Law” passed in 1947, at least 75 percent of office employees and 90 percent of the workers in any business in the country had to hold Egyptian nationality. This caused an employment crisis for Egypt’s Jews, who were an important part of the nation’s business life. Thousands were fired from their jobs or unable to find work and, being unable to earn a living, were forced to leave the country.

While all foreigners were targets of Egyptian displeasure in the late 1940’s, Jews fell under especially dark clouds of suspicion with the outbreak of hostilities in Palestine. The Zionist movement and Zionist youth groups, which sought to establish a Jewish homeland in Palestine, had indeed gained many adherents in Cairo and Alexandria, but Jews found themselves accused whether they had been active in the movement or not. Large numbers of individuals were arrested and interned for alleged Zionist activity. Jewish businesses were sequestered, Jewish bank accounts frozen, and exit visas could only be approved by a special government Agency for Jewish Affairs.

During these eventful years, as Rabbi Nahum witnessed the sorrows of his flock, he sought to intercede and to minimize the impact of all these rules with the Egyptian authorities. He himself had to tread very carefully in the face of government opposition, fearful that the entire Jewish community might suffer because of his words or actions. Rabbi Nahum was frequently asked to make statements denouncing the Zionists. During the few times he complied with such orders, he was sure to make his statements as short and as vague as possible. During Israel’s War of Independence, he was also asked to have prayers recited at all of Egypt’s synagogues for the victory of Egyptian forces. These orders he refused to follow at all.

Rabbi Nahum also was educated in a yeshiva in Tiberias when he was young.

One other item of interest now that Egyptian try to misuse him as an example of a wonderful Egyptian Jew.


Around 1950, at age 78, Nahum became totally blind, but continued to carry on his duties as best he could. He continued to officiate at the Shaar Ha Shamayim synagogue, and could give long quotations from the Hebrew Bible and rabbinical texts from memory. However, he became greatly depressed by what he realized was the inevitable decline of Egyptian Jewry. Suffering from increasingly severe medical ailments, he finally succumbed in 1960 at the age of 88. He was buried at the Bassatin cemetery outside Cairo. Nahum’s funeral was attended by thousands, including many Muslims and Christians.
In the decades that followed, much of the cemetery was vandalized and desecrated. Rabbi Nahum’s tomb is now inhabited by squatters.

Yes, that’s how much respect this “anti-Zionist rabbi,” who in fact had done many great things for the Egyptian government, has in Egypt today.