In a bid to show how ‘tolerant’ Egypt is (it has fewer than 15 Jews still living there), the Egyptian Minister of Antiquities has announced that a committee will be appointed the task of creating Egypt’s very first museum of religious tolerance. Report in Egyptian Streets: (With thanks: Boruch)

It is thought it will be located in the New Administrative Capital, near the city’s main mosque.

It will also include pieces from the ancient Egyptian period as well as the Islamic, Coptic and Jewish civilizations all while highlighting Islam’s teachings of tolerance and Egypt’s diverse religions.

The council is undergoing an election process of centerpieces  that will be made ready for display at the time of the museum’s construction, under the supervision of a panel of professionals. 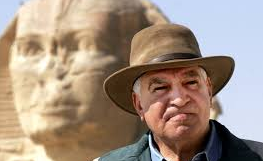 According to local news, those on the panel are the General Director of the Tahrir Egyptian Museum Sabah Abde Razik, General Director of the Islamic Museum Mamdouh Othman and ex-Antiquities Minister and Egyptology Zahi Hawass.
Currently, there exists the Coptic Museum in Old Cairo, as well as Islamic Art Museum near Tahrir, in Cairo’s downtown. Although there is an extremely small number of Jews in Egypt, the country  boasts a few synagogues, namely Ben Ezra which is open to the public unlike the others.

Magda Haroun, head of Egypt’s Jewish Community Council, is said to be attempting to create a national Jewish museum.