Electronic Intifada and idiot blogger Richard Silverstein both claim that the UNESCO resolution passed last week actually does not deny any Jewish connection to the Temple Mount.

They mention (correctly) that the resolution affrims “the importance of the Old City of Jerusalem and its Walls for the three monotheistic religions,” which presumably includes Judaism.

However, in regard to the Temple Mount itself, the resolution says the “Al-Aqṣa Mosque/Al-Ḥaram Al-Sharif, as reflected in the historic status quo, [is] a Muslim holy site of worship.”

Silverstein (who refers to the site as “the Haram” exclusively and falsely claims “When I was last in Israel in 1980, I visited the Haram and it was a peaceful place of worship for all who visited, including Jews) argues that the resolution “simply doesn’t address the issue” of Jewish ties to the Temple Mount.

Ah, but it does – by omission.

Because the resolution refers to two other “Palestinian” holy sites, the Ma’arat HaMachpelah and Kever Rochel. And in both of those cases, while it mentions their Arabic titles first, it does identify them as the “Tomb of the Patriarchs” and “Rachel’s Tomb.” And it specifically says that both of those sites “are of religious significance for Judaism, Christianity and Islam.”

Clearly, the authors of the resolution are not denying the Jewish ties to those holy sites, even if they minimize those ties.

Given that, the lack of mentioning any Jewish (or Christian) connection to the Temple Mount, and the refusal to use any other name but the Muslim names for the site, are clearly deliberate and an attempt to frame the site as exclusively Muslim and having nothing to do with Judaism.

Meanwhile, a Palestinian cartoonist correctly reacts to the UNESCO resolution as evidence that the Palestinian narrative has completely taken over UNESCO: 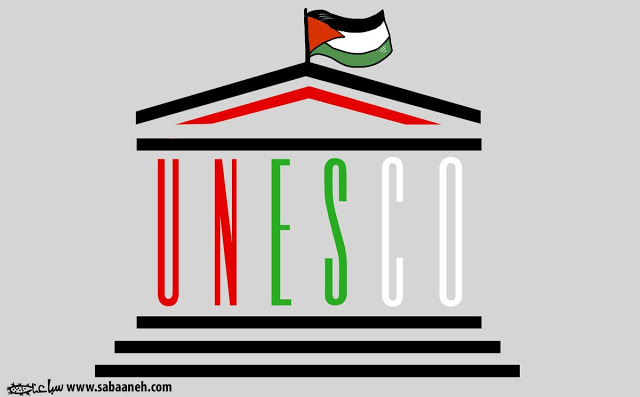 Hard to argue with that.