Do News Clarifications and Corrections Matter? Bah Humbug
Do corrections and clarifications to news stories matter when it comes to setting the record straight about Israel? How do we measure the impact of these corrections? Is it important to pressure news outlets to change stories when they fail to convey the truth, or worse yet, outright lie?
All respect to media watchdog organizations such as CAMERA, Honest Reporting, and BBC Watch. We know perfectly well these organizations are on Israel’s side, on the side of the truth. They catch ‘em red-handed, they do, and often manage to get the big guns, media outlets such as the New York Times, the Guardian, and the Washington Post, to retract or at least correct stories they run that make Israel out to be the bad guy, the facts be damned.
But there is something unsatisfying about the process of running down the mistakes, and getting them corrected. It makes the watchdogs look fussy and over-particular, and really, what good do those corrections do, anyway? News cycles are short. A correction on yesterday’s news?
You can wrap fish with it.
Let’s take for instance, this Australian story with the headline, Palestinian ‘executed’ after Israeli checkpoint knife attack. Here’s what happened: an Arab terrorist going through an Israeli security checkpoint (which is designed for the purpose of identifying and preventing terrorists from entering civilian areas), lunges at the IDF soldier manning the checkpoint and stabs him.
The terrorist is shot dead.
Honest Reporting complained about the story because of the title, which appears to refer to extra-judicial killing, and because the text refers to the terrorist as a “Palestinian fellow,” a descriptor designed to rebrand the terrorist as someone harmless.
In response to Honest Reporting’s report, 9 News changed the word “fellow” to the slightly less offensive “man.”
But the original title was left unchanged.
Anyone reading the story with an uncritical eye (both before and after the correction) will be left with the impression that Israel is a country of bloodthirsty, repressive, and murderous outlaws. And since Israelis are Jews, well, the reader will believe he now has good reason to dislike the Jews as a people. He will point to this story in debates online, and in conversations with friends. He will say, “It’s not just me that says Israelis are murdering Arabs in the streets, it’s the media.”
What is lost here is the truth: terrorists are the bad guys, Israeli soldiers the good guys, keeping the Israeli populace safe. 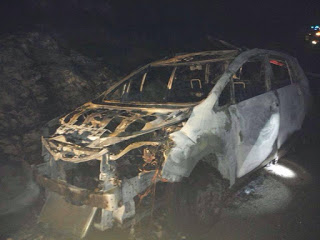 All AreaMan did was give Gross a way to spin the news while looking good, too.

He, Gross, hurt Elor Azaria with that word “killing.” I take that personally. And you should, too.
Corrections? They allow the media to be bad. Really bad. And then to dot their i’s and cross their t’s while no one is watching.
Because the show was already over one or more news cycles ago.
And who really cares, anyway?
Corrections.
Bah humbug.