TOP NEWS
http://jewishrefugees.blogspot.com/2017/05/djerba-leader-dismisses-pilgrimage.html
Once more we’re approaching the Lag Ba’Omer pilgrimage to the al-Ghriba synagogue on the Tunisian island of Djerba ( 9 – 15 May), the high point of the tourism calendar. And once more the Israelis are warning their nationals not to visit, while the locals are straining to re-assure visitors that all the necessary security arrangements have been made. (Perez al-Trabelsi is the owner of several hotels and was a candidate to be Tunisian tourist minister). Report in Al-Bawaba (with thanks: Boruch):

A Jewish community leader on Tunisia’s island of Djerba on Wednesday declared that the North African country was “safer than Israel”.

Perez al-Trabelsi made the assertion after Israel warned Jews worldwide against visiting Tunisia for an upcoming annual pilgrimage to Djerba’s El-Ghriba Synagogue. 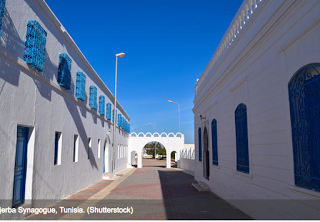 “The Israeli officials who are warning against visiting the country do not have Tunisia’s best interest at heart,” al-Trabelsi told Anadolu Agency.
Tunisia, he went on to assert, “is safe compared to Israel”.
He went on to voice expectations that the number of Jewish visitors to this year’s pilgrimage would be 150 percent higher than last year’s.
“Jews are expected to come in large numbers from all over the world, from France, Canada — even from Israel — to participate in this year’s festivities at the synagogue,” he said.
Earlier Wednesday, Israel’s anti-terrorism bureau upgraded its travel advisory against visiting Tunisia, claiming that terrorists “have continued to stage attacks against a variety of targets” in the North African country.