In this lavishly-illustrated piece, JTA takes a realistic look at the Jewish community of Djerba, one of the few surviving bastions of Jewish life in the Arab world. Antisemitism is a threat, but the tipping point comes when a Jew cannot find a partner or make a living. (In other news, the announcement that Tunisian women are allowed to marry non-Muslims is a major positive development for minority rights). (With thanks: Imre, Lily) 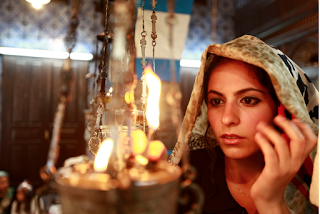 A Lag Ba’Omer pilgrim at the al-Ghriba synagogue in Djerba (Photo: Reuters/Anis Mili)

Belonging to one of the Arab world’s few active Jewish congregations, their patience reflects a determination to preserve their ancient tradition in a tight-knit community of 1,000. Many members feel duty-bound to remain on the island even though they can envisage no future here for their children.

“Everybody’s thought about leaving, myself included,” says Ben Zion Dee’ie, a 30-year-old yeshiva teacher who walked four miles to the El Ghriba Synagogue from his parents’ home in Hara Kebira, where nearly all Djerba Jews live. “The economy’s bad, the currency’s plummeting, tourism’s suffering because of terrorism and jobs are scarce and not well paying. It’s not perfect.”

But leaving “would be very difficult,” adds Dee’ie, who comes each year with other congregants to make sure El Ghriba has a minyan. “It feels wrong to leave where my ancestors lived for so many years.”

Nonetheless, various factors, including state-tolerated violence against Jews following Israel’s victory over its neighbors in the 1967 Six-Day War, have gradually almost emptied Tunisia of the 110,000 Jews who lived here before 1970. A few dozen families left following the 2011 revolution that briefly installed an Islamist and anti-Israel party in power.

That bout of instability was the latest chapter in the story that led to the near-total disappearance of centuries-long Jewish life from the Arab world amid hostility and poverty.

Jews on Djerba have also experienced these problems, not least in the explosion that al-Qaida terrorists set off outside the El Ghriba Synagogue in 2002 in which 20 people died, including 14 German tourists.

The explosion occurred three weeks before the Jewish holiday of Lag b’Omer, when hundreds of tourists, including some from Israel, gather at the El Ghriba for a pilgrimage that is particularly popular among Jews of Tunisian descent.

“It’s the only time of the year that we can count on having a minyan,” Dee’ie said at the synagogue, where the sounds of the shofar on Rosh Hashanah blended with the Muslim call to prayer and the chiming of church bells.(…)

“It’s a very good thing the police are here, they protect us, just like they protect you in Israel,” Dee’ie, who studied at a religious seminary in Israel in 2007. He returned to Hara Kebira but moved away last year to Zarzis, where his wife was born and he teaches a classroom of 15 children from that city’s Jewish community of 130 members.(…)

But in Tunisia, expressions of anti-Semitism, often featuring anti-Israel vitriol, continue to occur, reminding the country’s remaining 1,700 Jews “that the Arab, he is very easy to incite,” Dee’ie said.

A recent example came when Tunisia joined several other countries in banning the film “Wonder Woman,” apparently because its lead character is portrayed by the Israeli film star Gal Gadot. The Jewish-French philosopher Bernard-Henri Levy, who is not Israeli, was greeted during a 2014 visit to Tunisia by dozens of Islamists carrying signs calling on “Levy the Zionist” to leave.

The invitation to a Tunisian festival in July of the Jewish comedian Michel Boujenah provoked protests in Tunisia that local anti-racism activists said were anti-Semitic. Tunisia has several pending bills, introduced by Islamist and secular nationalists, proposing a blanket boycott on Israel and a ban on any Israelis from entering the country.

Notwithstanding, Tunisia’s government is showcasing its Jewish heritage sites, including Djerba, whose ancient synagogue is on Tunis’ list this year for locales put forth for recognition as world heritage sites by the United Nations. The government has made several statements about the positive role of its Jewish citizens, invested considerable resources in renovating sites of worship and is considering allocating two seats in parliament for representatives of the Jewish community.

But in parallel, authorities in Tunisia are “quietly confiscating” Jewish antiques, including a 15th-century Torah scroll whose whereabouts the government is refusing to disclose, according to an expose published last month by the French news site Dreuz.

The effects of anti-Semitism in Tunisia may be “unpleasant at times, but they are not a threat to the survival of this community,” said Dee’ie, who was ready to immigrate to Israel last year with his wife because they could not find an affordable apartment to their liking in Zarzis.

“Practical things matter: Whether Jews can find a Jewish partner, make a living and live a comfortable life,” he added. “I grew up here, but I don’t know if this is the place where my children will grow up.”