In contrast to other remnant communities of the Arab world, the Jews of Djerba are not only surviving, but thriving. Anneka Hernroth – Rothstein visited them over Hanucah for the Jerusalem Post (with thanks: Michelle):

Djerba is an island, in every sense of the word, and the Jewish community here is cohesive and deeply traditional in a time where many Jews fall into rapid assimilation. The Jewish community in Djerba is young, 50% of them are 20-years-old or younger, and it is a growing community, too; Jewish women in Djerba have an average of 4 children, and some as many as 10. 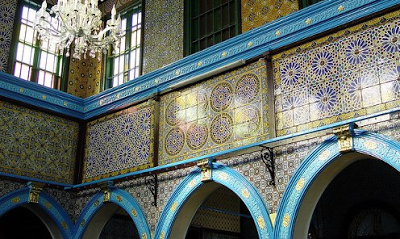 The Al-Ghriba synagogue on Djerba. Click here to see other remaining synagogues of the Muslim world (w/thanks: Janet)

It is both strange and wonderful to feel as welcomed and at home in an Arabic country as I do in Tunisia, and what fills me with an even greater sense of wonder is to see how the Jews here have stayed orthodox and Torah-true, living in relative calm coexistence with their Muslim neighbors.