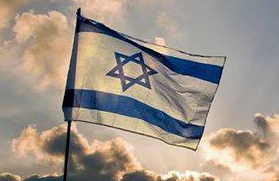 They really should make aliya, and vote in Israeli elections and sound off to their hearts’ content, those Diaspora Jews whose “lines”, to quote the Bible, “have fallen in pleasant places”, and criticise the little Jewish State from comfort and safety.  I put among this number the Aussies who have of late fallen for the propaganda of the New Israel Fund, a number that, I’m sorry to say, includes representatives of a large congregation whose pst rabbis were renowned for their robust love of Zion, and whose love was infectious.

In 2010, not long after I started blogging, I drew readers’ attention to shameful remarks regarding Israel by Sir Mick Davis, head of Anglo-Jewry’s plutocratic non-elected “Jewish Leadership Council”.

In his regular column in the Jerusalem Post, world-renowned Jewish leader Isi Leibler, who had some years earlier made aliya from Australia, trenchantly denounced Davis, observing inter alia:

He also heads a body known as the Jewish Leadership Council (JLC) – essentially comprised of a group of wealthy British Jews and their acolytes who, by virtue of their financial largesse, assume a dominant influence on many levels of communal life. The power represented by their collective wealth enables them not to be accountable to anyone and few would dare question their policies….

…. Resident in London, he had the chutzpa to berate the Israeli prime minister “for lacking the courage to take the steps” to advance the peace process, arguing that “I don’t understand the lack of strategy in Israel.” He also employed the terminology of our enemies, predicting an “apartheid state” unless Israel was able to achieve a two-state solution – unashamedly blaming Israelis rather than Palestinians for being the obstacle to peace.

His sheer arrogance was best demonstrated in his most outrageous remark: “I think the government of Israel has to recognize that their actions directly impact on me as a Jew living in London, UK. When they do good things, it is good for me; when they do bad things, it is bad for me. And the impact on me is as significant as it is on Jews living in Israel… I want them to recognize that.”

Aside from implying that Israel is responsible for the anti-Semitism he is encountering, Davis is effectively warning that when considering defense issues which may have life-or-death implications for Israelis, the government must be sure not to create problems for him in his non- Jewish social circles. From his London mansion, he blithely brushes aside suicide bombers, rockets launched against our children and the threat of nuclear annihilation because his gentile friends might complain about the behavior of his Israeli friends….”

Other critics of Davis’s stance included the indefatigable Melanie Phillips, in a Spectator column no longer reachable online, and Emanuele Ottolenghi, a senior fellow at the Foundation for Defense of Democracies in Washington, who opined:


“As the saying goes, you should practice what you preach – not what emerged from the recent panel discussion between Peter Beinart, former editor of the US liberal weekly the New Republic and recent heir to the late Tony Judt’s critique of Zionism, Guardian columnist Jonathan Freedland, and Mick Davis, chairman of the Jewish Leadership Council.

Davis lamented the existence of a supposed conformism among Jewish community leaders when it comes to voicing criticism of Israel in the open and called for more frank introspection – but the panel failed to make room for dissenting views, offering instead a harmonious choir of opinionated liberal conformism….Davis is upset because Israel’s actions have an impact on Diaspora Jewry – so are most Diaspora Jews by the way, because nobody likes to see police patrolling Jewish institutions across Europe. But most Jews would blame anti-Semites for distorting Israel’s actions and then using them as a pretext, rather than blaming Israel for their own discomfort.

Regardless of whether you approve or disapprove of Israel’s actions, it comes down to this. Do you blame the rape victim for wearing a miniskirt or do you blame the rapist? Most sane people know the answer – there is no excuse for rape.

And then there’s Davis, who, if logic follows (and it does not necessarily always do), should blame the rape victim and advocate more modest dressing.

This kind of logic sits at the helm of Anglo-Jewry today – something that should concern us infinitely more than the impact of Israel’s actions on Jewish comfort levels in Great Britain or the extent to which we allow ourselves to criticise Israel’s actions.”

Regrettably, Sir Mick is at it again, as the front page of the London giveaway paper the Jewish News indicates: read more in this blog by Jonathan Hoffman, given an honorable mention by Isi Leibler in the aforementioned column as one of the few Anglo-Jewish leaders brave enough to decry Sir Mick’s 2010 remarks. 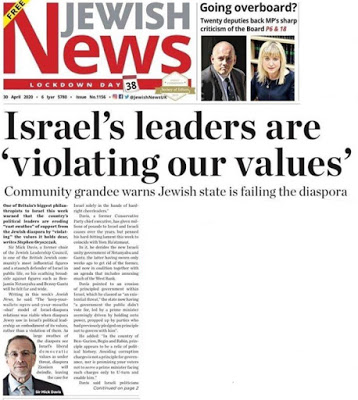