Turkey’s Haber7 published on Sunday an article claiming that Algeria has issued a new 500 dinar coin that says “Jerusalem is Ours:” 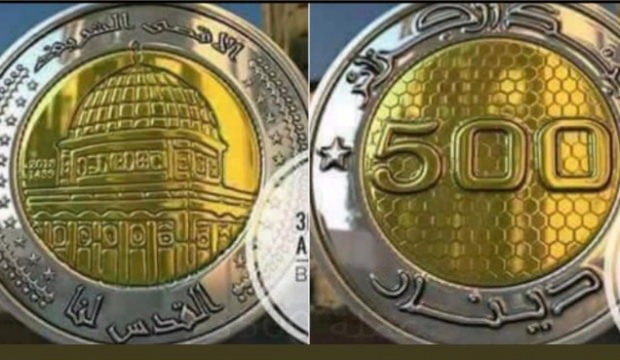 The rumor started over a year ago that Algeria would issue, for the first time, a 500 dinar coin (worth about $4.) This picture was an imagining of what one might look like by Algerian artist Abderezzak Bouhedda, who also proposed other designs as well.

Algeria has never issued any 500 dinar coin and I see no plans to do so.

When the rumor first appeared, Palestinian activists were thrilled, saying how much they appreciate Algeria. This is a story in itself, because it indicates that Palestinians – who have turned the image of the Dome of the Rock into their national symbol – are quite happy when other Arabs describe the site as theirs as well. In other words, Palestinians don’t seem to care if Jerusalem is considered Palestinian or  pan-Arab or pan-Muslim, as long as it isn’t even slightly Jewish.

Which in fact has been the position of  Muslims since shortly after Mohammed.