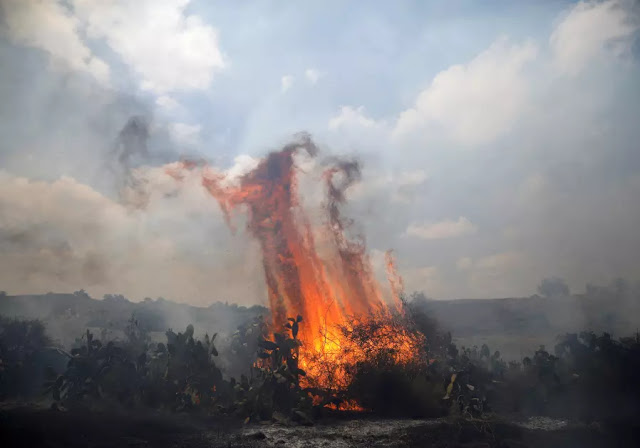 Israel’s Channel 13 reports that three fires broke out in the Kissufim Forest near Gaza this morning. Investigators determined that the cause of the fire was incendiary balloons from Gaza.

Two more fires broke out in the area overnight, also assumed to have been caused by incendiary balloons fired from the Gaza Strip.

In the last 24 hours, a total of nine fires broke out in the areas around Gaza. One of them destroyed 150 dunums of wheat fields in the Sha’ar Hanegev Regional Council

At the same time, Hamas threatens to escalate violence in the weekly riots at the security fence.

Since the ceasefire a month ago , about 50 fires have erupted in the vicinity, but according to the ceasefire rules, Israel has not attacked balloon launching units and has not reacted forcefully.

2,000 fires have been set in southern Israel and 8,700 acres burned between May 2018 and May 2019, according to the Jerusalem Post, which notes that the Palestinian habit of setting fires has reached ISIS in Iraq.