Last month MEMRI published several transcripts of hate speech by Imam Ammar Shahin at the Islamic Center of Davis (ICD) in Davis, California, where he explicitly called for the genocide of all Jews. These included these words from July 14::

After California members of Congress issued a condemnation, the Islamic Center of Davis released a non-apology apology filled with lies that is no longer on their website. The “apology” says


The sermon was about the theological virtues of one of Islam’s holiest sites, Al-Aqsa Mosque. He also addressed the recent horrific events including the illegal closure, occupation, and attacks against Al-Aqsa Mosque, in addition to the killing and injuring of Muslim worshipers, including the wounding of the Imam of Al-Aqsa Mosque, and the prevention of worship and the call to prayer at the Mosque. Specifically, the Imam was referring to individuals that are contributing to this oppression.Imam Shahin and the ICD reject any attempt to blame all Jews for Israel’s policies just like we reject the attempts to blame all Muslims for the acts of fringe groups. In reality, Jews around the world are on the front lines speaking out and protesting Israel’s repressive policies against Palestinians.
MEMRI, an extremist agenda driven organization that supports Israel’s occupation of Palestinian land, and other Islamophobic news organizations, accused Imam Shahin of anti-Semitism, quoting edited, mistranslated, passages of the sermon out of context.
If the sermon was misconstrued, we sincerely apologize to anyone offended. We will continue our commitment to interfaith and community harmony.

Afterwards, when the outcry remained, Shahin issued a somewhat stronger statement of apology – but he didn’t repudiate his words in any way. “To the Jewish community here in Davis and beyond, I say this deeply: I am deeply sorry for the pain I have caused.”

Essentially he said: Sorry you were hurt. But I still believe every word I said.

The organized Jewish community seemed to accept his apology at face value, even though the initial outrageous fake apology proves that he was only engaging in PR and does not in any way disagree with his very explicit antisemitic words that were documented in great detail.

A grassroots group formed in Davis and held a silent vigil last night.

Here was the announcement sent via email:

As most of you know by now, Imam Ammar Shahin of the Davis Islamic Center preached a hate-filled sermon  on Friday July 14 and also on July 21, in which he (quoting a Hadith) called for the annihilation of Jews. “Oh Allah, make this happen by our hands,” asking for his followers to participate in the slaughter “Oh Allah, count them one by one and annihilate them down to the very last one. Do not spare any of them.”.and referred to “the filth of the Jews”.
Shahin’s  supporters initially doubled-down and made excuses for the translated sermon,  an “apology” was later issued, and some elected officials and Muslim and Jewish leaders held a  closed joint  press conference in which speeches were made, including an “apology” by Imam Shahin  for the “pain” he caused. At no time was there any retraction or denunciation of the words quoted from the Hadith (the same words that are in the Hamas Charter which call for the murder of our Jewish friends, families and children). Neither was there any call for the Imam to be fired. Equally disturbing is the fact that no member of the DIC’s board of directors, nor its congregants,  have come out asking for his resignation.
No Christian, Jewish, or Muslim clergy who preaches murder of any minority group should be tolerated. Such speech leads to violence and murder. It simply has no place in a civilized society.
We need to do more to bring awareness to our community of this despicable and dangerous man. Imam Shahin has NOT said he was wrong to have made his statements (just that he was sorry for causing “pain”—as if he did not know beforehand).  Nor has he said he will stop preaching such vile ideas!
THEREFORE WE ARE HAVING A PEACEFUL VIGIL WITH SIGNS. NO SPEAKERS. NO MEGAPHONES. MAKING A STRONG STATEMENT WITH OUR PRESENCE AND SIGNS.

The protesters were purposefully spread out so that drivers would see them, which unfortunately does not make for good photos of the protest, but some 60 people participated, including many Christians.

I am told that many people of Davis had not been aware of the events happening in their own town and that they were shocked when they heard the details. 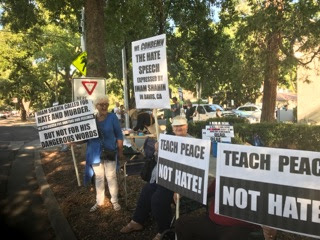 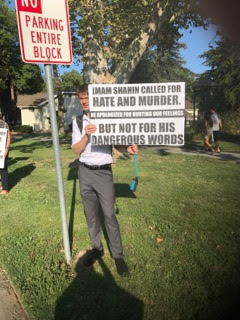 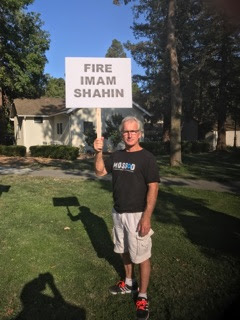 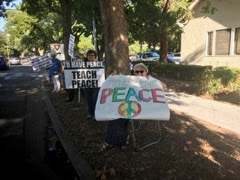 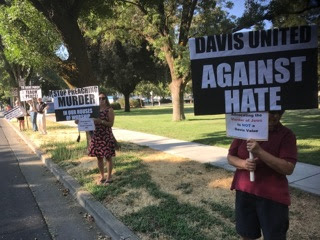