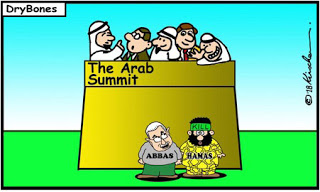 The 29th Arab Summit – concluded in Dhahran on 15 April – has presented President Trump with a wonderful opportunity to circumvent the Palestine Liberation Organisation’s (PLO) refusal to consider Trump’s eagerly-awaited proposals to end the Arab-Jewish conflict.


“We reaffirm that the Palestine Cause is the entire Arab nation’s main priority, stressing the Arab identity of occupied East Al-Quds as the capital of the State of Palestine.”

Using the term “Palestine Cause” rather than “Palestinian cause” indicates the Arab world now intends focusing on recovering territory lost in the 1967 Six Day War without necessarily creating another Palestinian Arab state – in addition to Jordan – in former Palestine.

The communique further reinforced this interpretation when adding:


“The conflict could be ended through a two-state solution that guarantees the establishment of an independent Palestinian state on the borders of 4 July 1967 with East Al-Quds as its capital.”

Using the words “could be ended” rather than “can only be ended” is highly significant in the context of this long-running conflict where every word uttered is invariably scrutinised and analysed in great detail.

The Summit’s declared “two-state solution” – pressed for the last 25 years by the PLO and the Arab League and endorsed by the United Nations and the European Union as the only solution to end the Arab-Jewish conflict – is now being seen by the Arab world as just one possible solution.


“We consider the Jordanian authorities as the only body in charge of the administration, maintenance and access to Al-Aqsa Mosque”

This unequivocal Arab endorsement of Jordan challenges the PLO having any future control or influence in the most sensitive area of crucial concern to the Islamic world in Jerusalem – the Moslem holy sites.

Jordan has maintained its presence in Jerusalem as Islamic Holy Shrines Custodian for the last 24 years as a result of the 1994 Peace Agreement between Jordan and Israel – article 9 declaring:


“1. Each Party will provide freedom of access to places of religious and historical significance.

2. In this regard, in accordance with the Washington Declaration, Israel respects the present special role of the Hashemite Kingdom of Jordan in Muslim Holy shrines in Jerusalem. When negotiations on the permanent status will take place, Israel will give high priority to the Jordanian historic role in these shrines.

3. The Parties will act together to promote interfaith relations among the three monotheistic religions, with the aim of working towards religious understanding, moral commitment, freedom of religious worship, and tolerance and peace.”

The Washington Declaration – signed by His Majesty King Hussein and Israeli Prime Minister Yitzhak Rabin at the White House on July 25, 1994 in the presence of President Clinton – formally ended the 46-year state of war between Jordan and Israel.

The Washington Declaration is testament to America’s role as the only power possessing the prestige and clout to change Arab and Jewish perceptions on resolving their long-running conflict.
Jordan’s special role in Jerusalem recognised by the Summit closely follows PLO Chairman Mahmoud Abbas’s recent assertion that Jordanians and Palestinians are indeed one people.

Ending the 100-years-old “Palestine Curse” which has so terribly afflicted both Jews and Arabs could well be within Trump’s grasp thanks to the Dhahran Summit.

(Author’s note: The cartoon  –  commissioned exclusively for this article  –  is by Yaakov Kirschen aka “Dry Bones” – one of Israel’s foremost political and social commentators – whose cartoons have graced the columns of Israeli and international media publications for decades.)