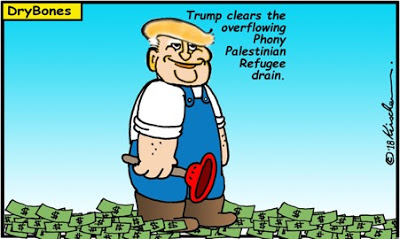 President Trump cancelled more than $US200 million in aid to the Palestine Liberation Organisation (PLO) this week – following his earlier decisions:

An infuriated PLO has responded by making the following false claims concerning Jerusalem and aid to refugees in the West Bank and Gaza – which have been uncritically and unquestioningly reported as news:


“Jerusalem is at the heart of the Palestinian, Arab and Islamic peoples”

This claim contravenes Article 1 of the Palestinian National Charter – which declares:

Claiming the “Palestinian people” is a separate and distinct people from the “Arab people” – is deceptive and misleading.


“After Jerusalem and UNRWA, this (cutting of aid to the PLO) is another confirmation of abandoning the two-state solution and fully embracing Netanyahu’s anti-peace agenda.”

Negotiations to conclude the  “two state solution” – the creation of  a 22ndArab state with Jerusalem as its capital – in addition to the Arab state of Jordan created in 78 per cent of former Palestine in 1946 – ended in April 2014 after unsuccessful negotiations spanning 20 years.

Other solutions now need to be explored that should involve Jordan and possibly Egypt negotiating with Israel to return to these two existing Arab states territory once occupied by them in Judea and Samaria (the West Bank), East Jerusalem and the Gaza District between 1948 and 1967.

2.   Cutting US financial aid to refugees in the West Bank and Gaza


“The rights of the Palestinian people are not for sale. There is no glory in constantly bullying and punishing a people under occupation. The U.S. administration has already demonstrated meanness of spirit in its collusion with the Israeli occupation and its theft of land and resources; now it is exercising economic meanness by punishing the Palestinian victims of this occupation.”

The PLO and Hamas have maintained this discriminatory two-tiered refugee segregation system in both Gaza and the West Bank for at least the last ten years.

The failure to close these camps and integrate their residents into the general Gazan and West Bank Arab populations is a damning indictment of Hamas and the PLO.
Expecting Trump to pick up the tab as these inhumane practices continue for crass political purposes is arrogant and unwarranted.

Trump has made it clear these funds will go to relieving genuine refugee distress in other parts of the world.

The PLO’s outright refusal to negotiate with Israel on Trump’s long-awaited peace plan – inflamed by these latest false claims – only ensures the PLO’s increasingly-rapid slide into political irrelevance.