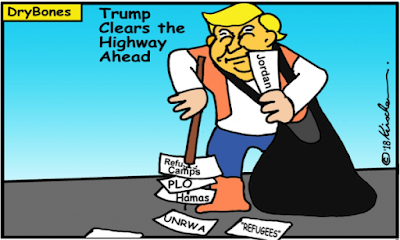 President Trump has created a veritable diplomatic tsunami affecting the political fortunes of the Palestine Liberation Organisation (PLO), Hamas and Jordan – with his decision to cease all future donations to the United Nations Relief and Works Agency (UNRWA) – currently US$360million per annum and comprising about 30 percent of UNRWA’s budget.

The numbers of UNRWA-registered Palestinian Arab refugees in Jordan, the West Bank and Gaza have been increasing in leaps and bounds annually because they include all the descendants of those Palestinian Arabs caught up in the 1948 and 1967 Arab-Israel wars.

UNRWA only provides services to the camps. UNRWA does not administer or police the camps, as this is the responsibility of the host authorities.

Jordan, the West Bank and Gaza comprise 83 per cent of the territory of former Palestine.

For UNRWA to count as “refugees” people who are now living in Arab-controlled parts of the same country where their forebears once resided – is really an insult to one’s intelligence.

Struggling under an accumulated deficit of US$271 million before Trump’s hammer blow – UNRWA had already shut down or slated for closure many programs and laid off large numbers of employees – mainly Palestinian Arabs.

The further cuts UNRWA will now be forced to make following America’s defunding will be critical to the PLO, Hamas and Jordan – as “refugees” coming under their respective jurisdictions affected by substantial cuts to their well-established entitlements see others not similarly subjected.

UNRWA funding decisions cannot possibly please all these “refugees” – and those receiving UNRWA aid in Lebanon and Syria.

The PLO, Hamas and Jordan will be lobbying furiously for UNRWA funding cuts to not be made to “refugees” living under their governance. Serious political consequences could ensue if they fail.
Jordan – enjoying a long-standing peace treaty with Israel – currently houses 50 percent of the total of UNRWA registered Palestinian Arab “refugees” in the West Bank, Gaza and Jordan.

Jordan – 70 per cent of whose population comprises Palestinian Arabs or their descendants formerly living in Palestine west of the Jordan River – is eminently qualified to enter into direct negotiations with Israel to recover territory lost by it in the West Bank to Israel in the 1967 Six Day War.

Successful negotiations would enable Jordan to:

Trump’s promise of direct American bilateral assistance to Jordan would facilitate this outcome.
In one fell swoop – Trump has:

Bucking – not backing – Trump is a sure-fire recipe for committing political suicide.

Author’s note: The cartoon – commissioned exclusively for this article—is by Yaakov Kirschen aka “Dry Bones”- one of Israel’s foremost political and social commentators –  whose cartoons have graced the columns of Israeli and international media publications for decades. His cartoons can be viewed at Drybonesblog