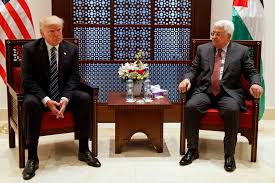 
“Peace can never take root in an environment where violence is tolerated, funded and even rewarded. We must be resolute in condemning such acts in a single, unified voice. Peace is a choice we must make each day – and the United States is here to help make that dream possible for young Jewish, Christian and Muslim children all across the region.”

Netanyahu did not mince his words, telling Trump:


“Terrorism, the deliberate slaughter of innocents, must be equally condemned and equally fought, whether it strikes in Europe, in America or in Israel – or for that matter, anywhere else. And as you said this morning, Mr. President, funding and rewarding terrorism must end.

Standing next to you, President Abbas condemned the horrific attack in Manchester. Well, I hope this heralds a real change, because if the attacker had been Palestinian and the victims had been Israeli children, the suicide bomber’s family would have received a stipend from the Palestinian Authority. That’s Palestinian law. That law must be changed.”

Article 7 of the Charter provides:


“It is a national duty to bring up individual Palestinians in an Arab revolutionary manner … He must be prepared for the armed struggle and ready to sacrifice his wealth and his life in order to win back his homeland and bring about its liberation.”


“Armed struggle is the only way to liberate Palestine. This it is the overall strategy, not merely a tactical phase. The Palestinian Arab people assert their absolute determination and firm resolution to continue their armed struggle and to work for an armed popular revolution for the liberation of their country and their return to it”

Every time a Jew is stabbed, run over, murdered in his bed or whilst praying in a Synagogue, blown up dining in a restaurant or attending a nightclub, killed by stones thrown at his car or targeted in drive by shootings, Palestinian Arabs – radicalised and encouraged by the PLO Charter to perpetrate such heinous crimes – are treated as heroes, many having schools named after them. Their families are rewarded by Abbas paying them monthly pensions which totalled $300 million in 2016.


“We bless every drop of blood that has been spilled for Jerusalem, which is clean and pure blood, blood spilled for Allah, Allah willing. Every Martyr (Shahid) will reach Paradise, and everyone wounded will be rewarded by Allah.”

Trump told the Arab-Islamic-American Summit in Riyadh on 21 May:

Trashing the hate-filled PLO Charter and ending incitement to indiscriminately slaughter Jews are necessary steps in this process.

Abbas will end up in the diplomatic wilderness if he ignores the messages delivered by both Trump and Netanyahu.