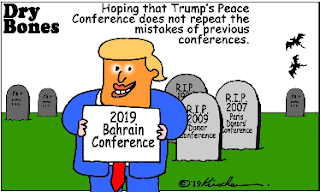 President Trump should not allow the euphoria that swept the world following the 27 November 2007 Annapolis Conference to infect the Manama Conference being jointly hosted by himself and Bahrain on 25-26 June.

US Secretary of State Condoleezza Rice’s closing remarks at Annapolis were brimming with hope:

Under their Joint Understanding Olmert and Abbas committed:

• 30 other States including Canada, China, France, Germany,Japan and the United Kingdom

A follow-up Donors’ Conference was held in Paris on 17 December 2007.

Delegations from 87 countries and international organisations pledged a total of US$7.4 billion to support Palestinian institution-building and economic recovery for the next three years.

Of this amount, US$3.4 Billion was pledged for 2008. This amount included:


“humanitarian assistance, which was essential to help relieve the daily lives of the Palestinian population, especially in Gaza.”

The International Conference in Support of the Palestinian Economy for the Reconstruction of Gaza was held in Sharm El-Sheikh on 2 March 2009. Participants pledged approximately US$4.48 billion covering the next two years.

They committed themselves to:


“start disbursing these pledges as quickly as possible in order to rapidly impact the daily lives of the Palestinians.”

The promised “Permanent Two-State solution” is dead and buried.

Trump and those attending Manama need to focus on how their new pledges will best help the daily lives of these captive populations still being governed by their 2007 rulers – Hamas and the Palestine Liberation Organisation.

The Manama Conference should consider:


• Funding new residential and infrastructure programsin neighbouring countries such as Egypt, Jordan and Saudi Arabia and

• Encouraging the legal migration of West Bank and Gazan Arabs to such countriesby offering them financial incentives to help themachieveprosperity and a better life for themselves and their families.

The invitees tothe Manama Conference will reportedly not include Israel. Mahmoud Abbas has refused to attend. Hamas has rejected the conference being held.

The Manama Conference should not continue pouring billions of dollars into these bottomless pits of misery and despair ruled by groups who will:


• not allow free elections and

• never recognise Israel as the national home of the Jewish people

Manama 2019 will hopefully not repeat the mistakes of Annapolis, Paris and Sharm El-Sheik.

(Author’s note:The cartoon —commissioned exclusively for this article —is by Yaakov Kirschen aka “Dry Bones”-one of Israel’s foremost political and social commentators —whose cartoons have graced the columns of Israeli and international media publications for decades. His cartoons can be viewed at Drybonesblog)