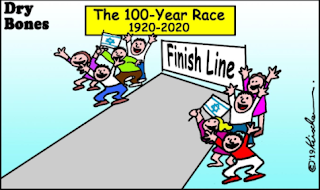 Designating the territory for reconstitution of the Jewish National Home in Palestine – begun with the San Remo Convention and Treaty of Sevres in April and August 1920 respectively – could finally be completed 100 years later in 2020.

Achieving this long-overdue outcome will require Israel to forma Government of National Unity by 11 December 2019 – headed initially by Benjamin Netanyahu as Prime Minister for a minimum term of six months  – enabling the new Parliament to ratify those areas of Judea and Samaria to which Israeli sovereignty will be extended as delineated by the Government.

This Unity Government should ideally hold at least 80 of the 120 seats in the Knesset so that there is an overwhelming majority of Israel’s elected politicians supporting any determinative decisions made by the Knesset in relation to Judea and Samaria.

Israel has been presented with this amazing opportunity following President Trump’s Secretary for State – Mike Pompeo – issuing this declaration on 19 November 2019:


“After carefully studying all sides of the legal debate, this administration agrees with President Reagan. The establishment of Israeli civilian settlements in the West Bank is not per se inconsistent with international law.”


“Under certain circumstances I think Israel has the right to retain some, but unlikely all, of the West Bank.”

Friedman had then cautioned:

Friedman  will get the  answers with the formation of Israel’s Government of National Unity – which hangs delicately by a thread and can vanish into thin air if it does not gain some oxygen by midnight on 11 December.

Fresh  elections  on  3  March 2020  – for  the  third time  in  a year – will then become mandatory and this wonderful opportunity will have flown out the window.

It would be a national disgrace and betrayal of Israelis and Jews worldwide if Israel’s political parties allowed their political differences and personal rivalries  to stymie the opportunity to determine the area within which the reconstitution of the Jewish National Home will be mandated after 100 years of fighting many wars and diplomatic battles.

Israel’s extended boundaries would be determined in coordination with President Trump and ratified over the next six months.

The fact that no Arab interlocutors will participate in any such decision-making process is regrettable.

However continuing Arab intransigence in refusing to commit to negotiate with Israel on Trump’s still unreleased deal  of  the  century – despite Trump’s best efforts to involve their participation in such decision-making with Israel – leaves Trump with no other option.

A Unity Government could be  reasonably  expected to agree to  extend Israel’s sovereignty  to  about 75% of Area C – about 45% of Judea and Samaria.


“ready to make tough decisions in the coming days”.

Hopefully Gantz as Deputy Prime Minister can rise to the occasion and allow Netanyahu – enjoying a unique  relationship  with  Trump – to  head  a  Government  of  National  Unity  to  grab  this once in  a hundred years opportunity.

An unprecedented – almost miraculous -confluence of events has emerged since Israel’s second-deadlocked September elections – that cries out for a national consensus and historic response by Trump, Netanyahu and Gantz.

Seize the moment – seize the day….

Author’s note:The cartoon – commissioned exclusively for this article—is by Yaakov Kirschen aka “Dry Bones”-one of Israel’s foremost political and social commentators – whose cartoons have graced the columns  of  Israeli  and  international  media  publications  for  decades.  His  cartoons  can  be  viewed at Drybonesblog.