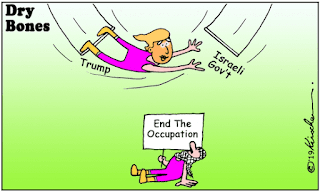 President Trump’s decision to recognise the right of Jews to live in Judea and Samaria (West Bank) ends a long-running Arab political campaign accompanied by murderous terrorist attacks to drive the Jews out under the Arab mantra – “End the Occupation”.

This mantra had become the Arabs’ rallying cry over the last 53 years as they sought to assert sovereignty over every square meter of this hotly-disputed territory.

These three little words managed to turn Israel’s miraculous victory in the 1967 Six Day War in Judea and Samaria – that saw the Jewish People’s triumphal return to the heart of the biblical and ancestral land of its forefathers – as something to be reviled and reversed.

Those mouthing the mantra did not seek to have the “occupation”ended in favour of Jordan – the previous Arab occupier between1948 and 1967.

Rather they were insisting it all be given to another group – the “Palestinians” –   who did not exist:

The “Palestinians”only first saw the light of day in 1964 when the Palestine Liberation Organisation (PLO) Charter was promulgated and Article 1 declared:

In 2019 the PLO’s legitimacy to rule the “Palestinians”is being challenged by Hamas.Reconciliation between these two competing power seekers is still not in prospect after 13 years of bitter internecine conflict – nor are elections anywhere in sight.

Jordan now sits on the sideline having abandoned any claim to Judea and Samaria (the West Bank) in
1988. Jordan shows no interest in attempting to try and restore – as far as is now possible – the status quo existing in these areas Jordan ruled on 4 June 1967.

President Trump is waiting patiently in the wings ready to release his “deal of the century”when Israel’s next Government is eventually formed.

It is surely time for a new mantra – “Right the Wrongs” – to enter into the lexicon of international diplomacy in the Middle East – to replace the racist and apartheid “end the occupation”.

The wrongs are the failure of the United Nations to acknowledge that:

• Security Council Resolutions 242 and 338 remain the only internationally accepted bases for resolving the conflict in former Palestine.

The United Nations’ failure to insist on these binding tenets of international law being universally acknowledged has proved to be a major stumbling block in resolving the Jewish-Arab conflict.

Bowing to extreme pressure from the Arab League and the Organization of the Islamic Conference -the United Nations has succumbed to a myriad of General Assembly resolutions that have buried these pillars of international law.

The sooner they again become the foundations for peace – the sooner some sanity will return to the Middle East.Trump’s decisiveness has amazingly ended 53 wasted years of Arab preoccupation with occupation.

Author’s note:The cartoon—commissioned exclusively for this article —is by Yaakov Kirschen aka “Dry Bones” —one of Israel’s foremost political and social commentators —whose cartoons have graced the columns of Israeli and international media publications for decades. His cartoons can be viewed at Drybonesblog