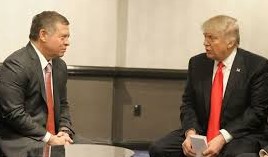 President Trump’s Special Representative for International Negotiations – Jason Greenblatt – has returned from his wide-ranging meetings in Jerusalem, Ramallah, Amman and Jericho with zero prospects of Trump brokering a deal between Israel and the PLO.

However Greenblatt’s belief in the pivotal role Jordan can play in resolving the 100 years old Jewish-Arab conflict was apparent in his tweet after meeting Jordan’s King Abdullah II:


“We agree on the need for peace between Israelis and Palestinians. Jordan an important ally in this effort.”

According to the Jordan Times:


“During the meeting, held at Al Husseiniya Palace, His Majesty stressed the US role in ending the stalemate in the Palestinian-Israeli peace process and reviving negotiations that should lead to a just and comprehensive solution to the conflict, based on the two-state formula.He asserted that reaching a just deal of a comprehensive peace that includes establishing a Palestinian state will reflect on efforts to achieve peace, security and stability in the region.”

King Abdullah is whistling in the wind in believing another Arab state could still be established – in addition to Jordan – in the territory comprised in the Mandate for Palestine where Israel presently exercises sovereignty in 17 per cent and Jordan 77 per cent – whilst sovereignty remains undetermined in the last 6 per cent – the West Bank (Judea and Samaria) and Gaza.

Negotiations between Israel and the PLO to create that second Arab State have extended over the last 24 years and been dormant since April 2014.

Those negotiations have failed because Israel and the PLO have been unable to resolve core demands despite two offers having been made by Israel in 2000/2001 and 2008 to cede its claims in over 90 per cent of the West Bank. Israel’s unmet demands are that:


1. The PLO recognise Israel as the nation state of the Jewish people

2. The major Jewish settlement blocs in Judea and Samaria be incorporated into the boundaries of Israel

5. Any such State be demilitarized

The PLO’s unmet demands are that:


1. The Palestinian State be granted sovereignty over all of the territory of the West Bank with its capital being located in East Jerusalem.

2. All Jewish settlements located in the West Bank and East Jerusalem be dismantled and their inhabitants be removed.

3. Palestinian Arab refugees who fled the 1948 Arab invasion of Western Palestine be allowed to return and settle in Israel.

Trumps’s ability to cut a deal in the face of these irreconcilable differences is severely hampered by the written commitments made to Israel’s Prime Minister Sharon by President Bush on 14 April 2004 and overwhelmingly endorsed by the US House of Representatives by 407:9 and Senate 95:3.

Those commitments – given to Israel to secure Israel’s total withdrawal from Gaza and four Jewish settlements in Judea and Samaria – back Israel’s above demands in any negotiations with the PLO.It seems inconceivable that Trump – the master deal-maker – would consider reneging on the Bush- Congress-Sharon deal.

If he did, Israel would not resume negotiations with the PLO.

If he doesn’t, the PLO would not resume negotiations with Israel.

If Trump wants to do a deal, he needs Jordan to come to the party and enter into direct negotiations with Israel to allocate sovereignty in the West Bank between Jordan and Israel – virtually completing the original two-state formula envisaged in 1922 by Article 25 of the League of Nations Mandate.

Greenblatt’s meeting with King Abdullah is a possible pointer to getting such negotiations underway.