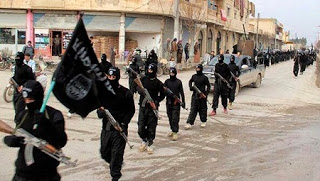 The United States and America seem set to jointly confront their common enemy – Islamic State – once President-elect Donald Trump is sworn into office on 20 January 2017.

This possibility emerged after a telephone call between Trump and Vladimir Putin following Trump’s stunning presidential victory on 8 November.

President Obama’s failure to co-operate with Putin for the last two years in seeking to degrade and destroy Islamic State has resulted in hundreds of thousands of needless civilian deaths and injuries and the internal and external displacement of millions of Syrians and Iraqis.

Islamic State has been confronted in Mosul – Iraq’s second largest city – for the last three months without Security Council authority by a US-led coalition airborne force supporting 100000 Iraqi and Kurdish infantry against an estimated 7000 Islamic State fighters. Some territorial gains have been made but little progress in ending the 30 month rampage by Islamic State and the spawning of  many offshoots in at least 25 other countries.

Identified as a threat to world peace and security in a number of Security Council resolutions – the UN’s resolve to defeat Islamic State has stopped short of authorising military action.

An eye witness account published on 7 December in the Wall Street Journal says it all:


“Yet ISIS hangs on. Is it because it concentrated its most seasoned personnel in Mosul proper? Is it because the remaining fighters have their backs to the wall and battle here with furious desperation? Or is it that the coalition – with the cold weather setting in, with the rain and low, cloudy skies interfering with airstrikes – is getting weary?

Whatever the explanation, I return home with a deep sense of unease. Between Al-Zohur and Al-Qadisiyyah, a handful of fanatics manages to hold off an Iraqi counterterrorism unit. A little to the west, in Mishraq, a single sniper holed up alone in a mosque stalls the coalition’s advance. One senses that the battle for Mosul, which began with a flourish, could bog down.

Is it possible that we might become resigned to the idea of a strange war in which 4,000 cornered fighters stop an ultra-powerful coalition? For the children of Mosul, held hostage and on the verge of famine, that possibility would be catastrophic. And, in the capitals of the West where populations already live in fear of the next terrorist attack, it would be an admission of weakness that could only embolden aspiring jihadists whose hearts beat to the rhythm of the supposedly great feats of their big brothers in the “caliphate” of Iraq and Syria.

The fire must be stamped out. And very soon. To bring this about, one looks to Barack Obama, who might prove willing to quicken the pace so as to end his second term with a victory for civilization over the pseudo-state that presently threatens every real state in the world.”

The chances of President Obama rising to the occasion seem very remote.

Regrettably the conflict is set to escalate unless Trump and Putin can agree on joint action to defeat Islamic State.

Their first step should involve obtaining a Security Council Resolution under Articles 42 and 43 of the UN Charter authorising the use of military force and obliging all member States to contribute such forces and resources as are necessary to defeat Islamic State in Syria and Iraq.

A Security Council Resolution is vital – if the mistakes of America’s 2003 invasion of Iraq are not to be repeated.

Whilst Russia and America continue to fiddle, Syria and Iraq bleed and burn.

It is time to start getting serious.