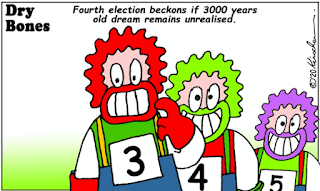 The votes are in – and it seems Israel’s Prime Minister – Bibi Netanyahu – is just three politicians shy of realising the 3000-years old dream of the Jewish People to regain sovereignty in Judea and Samaria – its ancient and biblical heartland.

The opportunity to turn this dream into a miraculous reality came with the release of President Trump’s Peace Plan on 28 January – embraced by Netanyahu but rejected by the Israeli Arabs, the PLO and the Arab League.

America and Israel’s response was to set up a joint six-member Sovereignty Mapping Committee to determine where Israeli sovereignty in Judea and Samaria could be extended immediately. The residue – about 40% of Judea and Samaria where about 95% of the Arab population live – would continue to enjoy its current status quo – mainly under total PLO administration and security control.
Judea and Samaria formed part of the territory in which the Jewish National Home could be reconstituted following:

These rights vested in the Jewish people were preserved under article 80 of the United Nations Charter when the League of Nations was wound up on 20 April 1946.
Netanyahu’s main rival in Israel’s election held on 2 March – Benny Gantz – accepted the Trump Peace Plan but made it clear he would only implement it with the agreement of the Arab States and the international community. Given the rejection of the Plan by the Arabs and the European Union – Gantz’s promise was simply hot air that never had any chance of being implemented.
This latest election was the first in Israel’s history that had presented the electors with the opportunity to vote on the Jewish people regaining sovereignty in Judea and Samaria after an absence of 3000 years.
The battle lines were drawn – Netanyahu would do so immediately. Gantz would do so maybe, perhaps, possibly – but not certainly for sure – in the future.

The results were staggering:

Yet Netanyahu only managed to secure 58 of the 61 seats needed to turn this 3000 years-old dream of the Jewish people into a reality.

Netanyahu’s ability to find the support of another 3 of his 47 Jewish political opponents is complicated by the fact that he has been indicted by the Attorney-General in three cases alleging fraud and corruption and is due to appear in court on 17 March.

Four of Netanyahu’s 47 political opponents reportedly could switch their allegiance to Netanyahu to enable him to make this dream a reality.

Given this once in 3000 years opportunity of restoring Jewish rights in Judea and Samaria – it would be strange if many more of the remaining 43 politicians – including Liberman’s 6 Yisrael Beiteinu bloc – were not prepared to put the national interest of the Jewish People before their personal hatred of Netanyahu.

Netanyahu should not be written off just yet.

The Jewish People’s long-held dream – if unrealized – could then turn into a debilitating nightmare – resulting in unprecedented political upheaval, civilian demonstrations and unrest.

Author’s note: The cartoon – commissioned exclusively for this article—is by Yaakov Kirschen aka “Dry Bones”- one of Israel’s foremost political and social commentators –  whose cartoons have graced the columns of Israeli and international media publications for decades. His cartoons can be viewed at Drybonesblog.