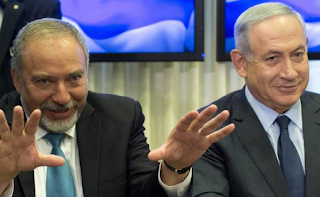 An opening to ending Israel’s election deadlock has come after Yisrael Beiteinu faction chairman Oded Forer sent a formal letter to the head of the Likud’s coalition negotiating team, Yariv Levin, on 11 October, asking for negotiations on the policy guidelines for the next government.

Israel’s President Reuven Rivlin should exploit this opening to try and save Israel going to a third election in twelve months – by summoning Israel’s Prime Minister Benjamin Netanyahu and Yisrael Beitienu head Avigdor Liberman to the President’s residence for negotiations on forming a Netanyahu-Liberman coalition Government.

Rivlin’s attempt to get Netanyahu and Blue and White leader Benny Gantz to form a Government of National Unity failed quite spectacularly and in a very short time.

Rivlin’s failure was quickly followed by:


· Netanyahu and Gantz failing to reach any agreement in further negotiations

· Netanyahu and Gantz both rejecting a proposal by Liberman very shortly after he proposed it. A third election at an estimated cost of US$220 million – and the possibility it could also end in deadlock – constitutes political suicide.

President Rivlin would be shirking his responsibility as President if he allowed a third election to take place without having made this last ditch attempt to stop Israel’s descent into another bout of electoral madness.

The best prospects of forming a new Government involve a coalition between the Right Wing parties holding 55 votes and Yisrael Beiteinu holding 8 votes – enough to create the 61 votes needed to form Government for the next four years.

Avoiding a third election has increased exponentially following these recent international developments that have occurred since Israel’s second indecisive election on 17 September:

· The Kurds in Turkey being caught up in any ensuing conflict

· The explosion of an Iranian state oil company tanker near the Saudi port city of Jeddah,

Any deterioration in these potentially disastrous situations could have serious implications for Israel’s safety and security. Israel must have a government in place ready to deal with their consequences.

Rivlin – armed with Forer’s letter to Levin and Israeli voters clearly-expressed wishes – has been given sufficient justification to get Netanyahu and Liberman – for whom 310154 Israelis voted – to sit down and negotiate Liberman’s list of demands for forming a new Netanyahu-Liberman Government before Netanyahu’s mandate to do so expires on 24 October.

Neither Netanyahu nor Liberman should have any expectation that they are going to emerge from the President’s residence with a complete victory for the positions they might initially take when they first sit down with the President.

Rivlin’s prestige and canny political skills could just get them to an agreed compromise.

Rivlin will have earned three stars from the Michelin Guide – and the gratitude of Israeli voters – if he succeeds in cooking-up a Netanyahu-Liberman omelette using a recipe whose ingredients are unacceptable to both of them.