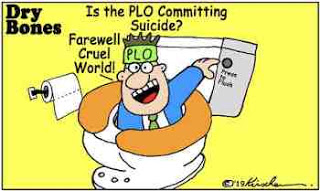 President Trump has been given the clearest notice that his deal of the century will be stillborn if he designates any role for the Palestine Liberation Organization (PLO) in its implementation.

In a remarkable outburst that can best be described as his “suicide note”– PLO Chairman Mahmoud Abbas declared on 25 July:

Yet for the last 25 years the PLO – aided and abetted by Jordan – has refused to yield its claim to sovereignty over every square meter of West Bank real estate – when compromise could possibly have resolved the 100 years-old Arab-Jewish conflict.

Two days prior to Abbas’ suicide note , the US Congress in a rare show of bipartisanship had offered the PLO a lifeline to enable it to negotiate with Israel on Trump’s yet-to-be-released proposals – overwhelmingly passing House Resolution 246 by a vote of 398-17 with 5 voting ‘present’.
Resolution 246:

So where to from here?

Reunifying parts of the West Bank with Jordan in direct negotiations between Jordan and Israel should now be Trump’s objective, recognising the following resolution passed at the 8th meeting of the Palestinian National Council in February-March 1971:


…“Jordan is linked to Palestine by a national relationship and a national unity forged by history and culture from the earliest times. The creation of one political entity in Transjordan and another in Palestine would have no basis either in legality or as to the elements universally accepted as fundamental to a political entity…. In raising the slogan of the liberation of Palestine and presenting the problem of the Palestine revolution, it was not the intention of the Palestine revolution to separate the east of the River from the West, nor did it believe the struggle of the Palestinian people can be separated from the struggle of the masses in Jordan…”

Author’s note:…The cartoon—commissioned exclusively for this article—is by Yaakov Kirschen aka “Dry Bones”—one of Israel’s foremost political and social commentators—whose cartoons have graced the columns of Israeli and international media publications for decades. His cartoons can be viewed at…Drybonesblog