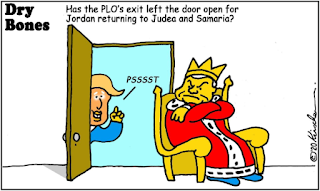 Advancing an end to the 100-years-old Jewish-Arab conflict has becomea miraculous possibility since the formation of an Israeli Government of National Unity just 7 days ago.


“It’s time to apply the Israeli law and write another glorious chapter in the history of Zionism. These territories are where the Jewish nation was born and grew.This will not distance us from peace, it will bring us closer.”

The Jewish People’s right to reconstitute its ancient Jewish National Home in Judea and Samaria – the biblical heartland of the Jewish People  – after 3000 years – had been recognized by the international community in:


• 1920: The San Remo Resolution and the Treaty of Sevres

• 1922: The League of Nations Mandate for Palestine

Attempts by that international community to deny such vested legal rights in the Jewish People over the past 53 years had exacerbated the long-running conflict – contributing materially to it failing to be resolved.

Netanyahu had no compunction in calling out and exposing the continuing travesty of justice that these current protestations represented.

However the roadblock jamming any progress in resolving the conflictwas suddenly cleared when days later PLO President Mahmoud Abbas announced:


“The Israeli occupation authority, as of today, has to shoulder all responsibilities and obligations in front of the international community as an occupying power over the territory of the occupied state of Palestine, with all its consequences and repercussions based on international law and international humanitarian law, particularly the Fourth Geneva Convention of 1949, which holds the occupying power responsible for the protection of the civilian population under occupation and their property, criminalizes collective punishment, bans theft of resources, appropriation and annexation of land, bans forced transfer of the population of the occupied territory and bans transfer of the population of the occupying state (the colonialists) to the land it occupies, which all are grave violations and war crimes”

Stripped of the lies and false and deceptive claims contained in this statement that have formed part and parcel of the PLO’s propaganda arsenal since its formation in 1964 – Abbas’s message was clear: Abbas was now turning over responsibility for Judea and Samaria to Israel.

The PLO had never claimed “regional sovereignty over the West Bank in the Hashemite Kingdom of Jordan” or “on the Gaza Strip” as article 24 of its founding 1964 Charter declared. Its activities were to be “on the national popular level in the liberational, organizational, political and financial fields”.

This PLO position only changed in 1968 after Jordan – having occupied Judea and Samaria between 1950 and 1967 driving out every Jew living there – lost that territory to Israel in the Six Day War. Gaining sovereignty in 100% of Judea and Samaria by the creation of another Arab State became the focus of the PLO from 1968.

President Trump’s peace plan offeringthe PLO possibly 70% of Judea and Samaria plus Gaza (see map below) has been rejected by the PLO. 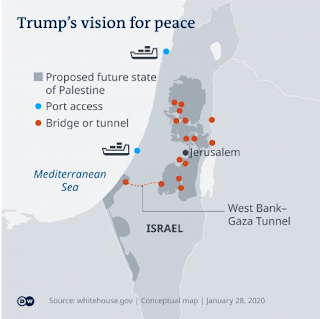 Abbas –  in turning over responsibility for Judea and Samaria to Israel  – has opened the door to Jordan replacing the PLO as Israel’s negotiating partner.Successful negotiations between Jordan and Israel could see Jordan annexing part of Judea and Samaria, Jordanian citizenship being restored for the Arab residents as existed between 1950 and 1988 and a possible end to the Jewish-Arab conflict.
King Abdullah – expect a call from President Trump.

Author’s note: The cartoon –commissioned exclusively for this article —is by YaakovKirschen aka “Dry Bones” –one of Israel’s foremost political and social commentators –whose cartoons have graced the columns of Israeli and international media publications for decades. His cartoons can be viewed at Drybonesblog.