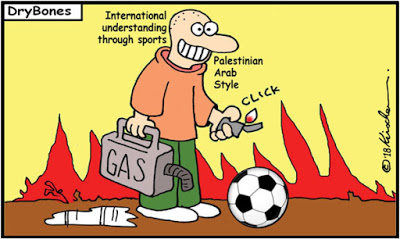 Hatred against Britain and Israel surfaced in Gaza as England progressed its way through the World Cup to meet Sweden in the quarter finals.

One Gaza fan was outspoken:


“Of course I will support Sweden.

I can’t imagine a Palestinian supporting England, which created the Balfour Declaration, or not supporting the country that stood before the world and recognized our state.”

The 1917 Balfour Declaration has never been forgotten or forgiven by the Palestine Liberation Organisation (PLO) and Hamas – both of whom consider the Declaration to be null and void – spending decades in spruiking this false message to their respective constituencies – fomenting Arab hatred against the Jews since the Declaration first called for the establishment in Palestine of a national home for the Jewish people.

The fuming Gaza fan was expressing his resentment by barracking for Sweden – even though Sweden was one of the 51 countries that transformed the Balfour Declaration into binding international law by unanimously incorporating it in the League of Nations Mandate for Palestine in 1922.

Our anguished fan was blissfully unaware of these facts having obviously not studied the 100 years old Arab-Jewish conflict. Anti-England prejudice was enough to back his decision to go for Sweden. True – Sweden had purged itself of its 1922 decision when officially recognizing the State of Palestine in October 2014 – making it the first major European Union member state to back the PLO’s statehood bid.

However in atoning for its 1922 sin, Sweden’s recognition of the “State of Palestine” was a fiction that failed to meet the requirements demanded in international law by Article 1 of the 1933 Montevideo Convention which states:


“The state as a person of international law should possess the following qualifications:

a. A permanent population

b. A defined territory

d. Capacity to enter into relations with the other states

FIFA’s admission of the Palestinian Football Federation as a member of FIFA in 1988 had also contravened Article 10.1 of FIFA’s then governing articles:


‘Any Association which is responsible for organising and supervising football in its country may become a Member of FIFA. In this context, the expression “country” shall refer to an independent state recognised by the international Community.’

FIFA started living in its own dream world 26 years before Sweden joined it. Who will replace Sweden as Britain’s nemesis was summed up by another fan:


“Anyone supporting England is supporting Israel itself. These teams represent their countries and governments and will raise their flags in the stands. How can I support the country that allowed the Jewish state on our land?”

The Gazan fans are in for a shock and a reality check when they begin choosing one of the three remaining teams – France, Belgium or Croatia – to topple the evil Brits.

France, Belgium and Croatia just happen to have all voted in favour of the Mandate for Palestine incorporating the Balfour Declaration.

The semi-finals, final and third-place playoff will be agony for Gazan viewers as one of these last four countries holds up the trophy on the winner’s podium come finals day – the others the three minor places – with their flags filling Gaza’s TV screens.

The moral is clear – international law cannot be turned on and off as circumstances dictate – because one day the perpetrator will become entrapped in the hopeless position that the Arab States, the PLO and Hamas now find themselves.

(Author’s note: The cartoon – commissioned exclusively for this article—is by Yaakov Kirschen aka “Dry Bones”- one of Israel’s foremost political and social commentators – whose cartoons have graced the columns of Israeli and international media publications for decades. His cartoons can be viewed at Drybonesblog)