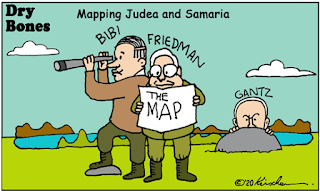 The formation of a joint America-Israel committee to map out the areas of Judea and Samaria within which Israel’s sovereignty will be recognized by America  – has presented Israeli voters with a real choice between the policies of Prime Minister Bibi Netanyahu and his rival Benny Gantz at the upcoming elections on 2 March.

Addressing Likud Party supporters at a campaign launch event in Jerusalem on 21 January – Netanyahu promised to “impose Israeli sovereignty on the Jordan Valley and northern Dead Sea” and to all Israeli communities in Judea and Samaria “without exception.”

Netanyahu’s proposal to take such unilateral action was tempered with the release of President Trump’s deal of the century on 28 January containing the following conceptual map indicating those areas of Judea and Samaria where America would recognize Israel’s claim to sovereignty: 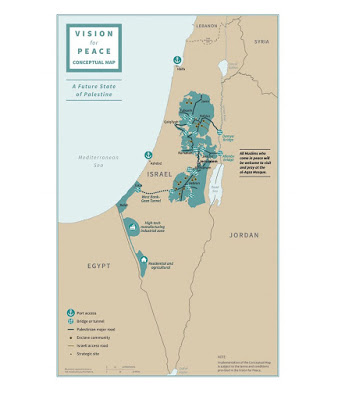 America’s Ambassador to Israel – David Friedman – warned Netanyahu against precipitately undertaking his own sovereignty plan – explaining there was a waiting period before sovereignty could be extended:


“The waiting period would be the time it takes for them to obtain internal approvals and to obviously create the documentation, the calibration, the mapping, that would enable us to evaluate it, makes sure it’s consistent with the conceptual map. If they wish to apply Israeli law to those areas allocated to Israel, we will recognize it.”

Both Israel and America would have probably prepared their own maps already.  Jared Kushner – chief architect of the Trump plan – has virtually confirmed this – saying it will take only “a couple of months” for the Committee to complete its work. Marrying the two maps to achieve this truly historic outcome is that close.

In ignoring the Mapping Committee – Gantz is signalling the continuation of his policy opposing Israel extending its sovereignty into Judea and Samaria with America’s approval.
Gantz has made his own policy very clear:


“After the elections, we will work to apply [Israeli] sovereignty on the Jordan Valley. We will do this in a nationally agreed process and in coordination with the international community.”

Believing the international community would ever agree to Israel extending its sovereignty into any part of Judea and Samaria – without swaps of existing Israeli sovereign territory – is totally unrealistic. The international community has been fixated for decades on seeing another Arab State created in the entirety of Judea and Samaria – or in an area of the same size including land currently part of Israel.

Gantz – in limiting sovereignty to just the Jordan Valley – is dashing the hopes of an estimated Jewish population of 464,353 in 131 settlements seeking unification with Israel.

Israeli voters now have a clear choice to end the political deadlock that has followed two indecisive elections held in the past twelve months:


Is it Netanyahu – promising the restoration of sovereignty in parts of the heartland of the Jewish people’s historic and biblical homeland for the first time in 3000 years?
OR

Is it Gantz – promising more of the same in Judea and Samaria that has been going on for the last 53 years?

The choice is stark and the direction Israel will take for generations to come is at stake.

Author’s note: The cartoon – commissioned exclusively for this article  is by Yaakov Kirschen aka “Dry Bones”  –  one of Israel’s foremost political and social commentators – whose cartoons have graced the columns of Israeli and international media publications for decades. His cartoons can be viewed at Drybonesblog.