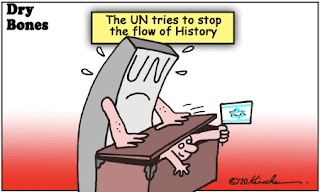 The United Nations is disgracefully trying to prevent a miracle happening 100 years after the world first gave its historic imprimatur to an impossible dream becoming a possible reality:  The restoration of Jewish sovereignty in 1697km² [square kilometres] of the Jewish People’s biblical heartland in Judea and Samaria (West Bank).

The defeat of the 400 years-old Ottoman Empire in World War One revived the Jewish People’s 3000-years-old dream of regaining nationhood in their ancient homeland – which had extended across both banks of the River Jordan where the twelve tribes of Israel had finally settled 40 years after their exodus from Egypt.

Signatories for the British Empire were representatives of:

Article 95 provided that Palestine – within such boundaries as might be determined by the Principal Allied Powers – be administered by a Mandatory to be selected by them. The Mandatory was to be responsible for putting into effect the Balfour Declaration made on 2 November 1917, by the British Government – and adopted by the Allied Powers – in favour of the establishment in Palestine of a national home for the Jewish people – it being clearly understood that nothing would be done which might prejudice the civil and religious rights of existing non-Jewish communities in Palestine – or the rights and political status enjoyed by Jews in any other country.

The League of Nations’ 51 member states unanimously appointed Britain as Mandatory and approved the terms of the Mandate for Palestine on 24 July 1922.

Intervening political events in Syria between 1920 and 1922 involving France and Britain saw the Mandate’s provisions deny the Jewish People the right to reconstitute the Jewish National Home on the East Bank of the Jordan River where two and a half of the twelve tribes had settled after reaching the Promised Land.

Judea and Samaria were reserved however for the Jews under the Mandate – that right being preserved under article 80 of the 1945 United Nations Charter notwithstanding the demise of the League of Nations in 1946.

After Britain handed its Mandate back to the United Nations in 1948 – every Jew living in Judea and Samaria was driven out by the invading army of Transjordan which itself comprised 77% of the Mandate territory and had achieved independence in 1946.

Judea and Samaria were unified with Transjordan to become “The West Bank in the Hashemite Kingdom of Jordan” from 1950 to 1967 – recognized only by Great Britain, Iraq and Pakistan. Jordanian citizenship was extended to all its Arab citizens from 1954 to 1988.

Jordan’s loss of Judea and Samaria to Israel in the 1967 Six-Day War saw some 450,000 Jews returning to reclaim their patrimony over the next 53 years – but the international community’s seal of approval soon changed to outright condemnation. President Trump’s 2020 Peace Plan has confirmed those vested legal rights acquired 1920-1922 by the Jewish People in Judea and Samaria.

An amazing miracle is about to occur on 1 July without any parallel in world history.

Author’s note: The cartoon – commissioned exclusively for this article—is by Yaakov Kirschen aka “Dry Bones”- one of Israel’s foremost political and social commentators – whose cartoons have graced the columns of Israeli and international media publications for decades. His cartoons can be viewed at Drybonesblog.