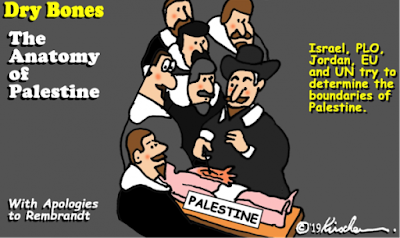 Ending the Arab-Jewish conflict over the territory called “historic Palestine” has little chance of success until its territorial boundaries are first agreed between Israel, the Palestine Liberation Organisation (PLO), Jordan, the European Union (EU) and the United Nations (UN).

Rima Najjar – a retired professor of English literature at Al-Quds University – claims in a recent article that the territory of “historic Palestine” has been subdivided into Israel, the West Bank and the Gaza Strip but is effectively controlled by the Jewish State.
The following facts contradict her assertions:

Najjar has claimed in an earlier article:


“How deep is the historical illiteracy of Senator Chuck Schumer of New York, the Democratic Party and Donald Trump and his party?
It is so deep, they are even immune to déjà vu, also known as “cryptomnesia”, which is where history is forgotten but nevertheless stored in the brain.”

Najjar, the UN, EU, even Mahmoud Abbas, are the historical illiterates suffering from cryptomnesia when it comes to determining the boundaries of historic Palestine – having written off the biblical history of “Eretz Yisrael” and the modern day history of “Palestine” between 1917 and 1947.

Najjar has form – having falsely stated in 2017:


“Israel now has sovereignty over all of mandate Palestine.”

Najjar also uttered her historic Palestine canard when calling for Israel’s elimination in 2018:


“The Palestinians have never held the bargaining chips in their tragedy and might as well go for broke – ending the Apartheid Zionist colonial regime in all of historic Palestine.”


“I don’t know what it means to be Palestinian Jordanian, which is how I began my life …”

Najjar’s identity crisis disappears once she recognises that Jordan is 78% of historic Palestine.
Until Israel, the PLO, Jordan, the UN and EU all agree on the boundaries of historic Palestine– any hope for ending the 100-years conflict between Arabs and Jews remains a mirage.

(Author’s note: The cartoon — commissioned exclusively for this article — is by Yaakov Kirschen aka “Dry Bones”- one of Israel’s foremost political and social commentators — whose cartoons have graced the columns of Israeli and international media publications for decades. His cartoons can be viewed at Drybonesblog)