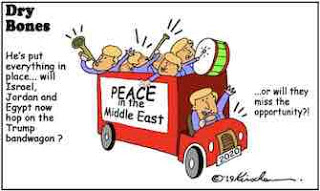 President Trump has now delivered the missing piece in his plan to end the 100 years old Jewish-Arab conflict – providing the incentive necessary for Israel’s warring political parties to bury their hatchets and form a new Israeli Government within the next 21 days.

This unique opportunity for peace trumps the domestic differences that have prevented Israel’s political parties forming that new Government following the elections in April and September 2019.

Trump has been progressively signposting his roadmap for the last two years:


• Moving the American Embassy from Tel Aviv to Jerusalem

• Declaring Jerusalem as the capital of Israel

• Closing down the Palestine Liberation Organisation (PLO) Offices in Washington

• Flagging Israel’s right to retain at least some  but – “unlikely all” – of the West Bank,.

Now Trump has made the end goal of his “deal of the century” very clear with the following statement issued by Secretary of  State Mike Pompeo:

US public statements on settlement activities in the West Bank have been inconsistent over decades. In 1978, the Carter administration categorically concluded that Israel’s establishment of civilian settlements was inconsistent with international law. However, in 1981, President Reagan disagreed with that conclusion and stated that he didn’t believe that the settlements were inherently illegal.

Subsequent administrations recognized that unrestrained settlement activity could be an obstacle to peace, but they wisely and prudently recognized that dwelling on legal positions didn’t advance peace. However, in December 2016, at the very end of the previous administration, Secretary Kerry changed decades of this careful, bipartisan approach by publicly reaffirming the supposed illegality of settlements.

After carefully studying all sides of the legal debate, this administration agrees with President Reagan. The establishment of Israeli civilian settlements in the West Bank is not per se inconsistent with international law.”

The right of Jews to live in Judea and Samaria (West Bank) for the purposes of reconstituting the Jewish National Home there has been enshrined in international law under article 6 of the 1922 Mandate for Palestine and article 80 of the 1945 United Nations Charter.

The United Nations, the European Union and the Organisation of Islamic Cooperation have denied the legitimacy of these Jewish claims – emboldening the Arabs to claim 100% of these territories. Pompeo’s statement has quashed the Arabs’ claims.

One roadblock still remaining requires Trump to identify the Arab interlocutors prepared to stand up and negotiate with Israel on Trump’s plan. Pompeo has given the PLO one last opportunity to join the negotiations with Israel.


“The  United  States  encourages  the  Israelis  and  the  Palestinians  to  resolve  the  status  of Israeli settlements in the West Bank in any final status negotiations.”

The PLO had already unequivocally refused to negotiate on Trump’s plan – and will continue to do so.Trump should focus on Jordan and Egypt -the last two Arab States to have occupied Judea and Samaria (West Bank) and Gaza respectively between 1948 and 1967 – to fill the void.

Israel needs  a new  Government  within the  next  21  days  or  face  another  expensive  and debilitating election  in  March  2020 – just  as  Trump  is  bidding  for  re-election – when  he  might  consider  it inopportune to release his plan.

Israel, Jordan and Egypt must hop on the Trump bandwagon now.

Author’s note:The  cartoon — commissioned  exclusively  for this  article — is by  Yaakov Kirschen aka “Dry Bones” — one of Israel’s foremost political and social commentators — whose cartoons have graced the  columns of  Israeli and  international  media  publications for decades. His  cartoons can be  viewed at Drybonesblog