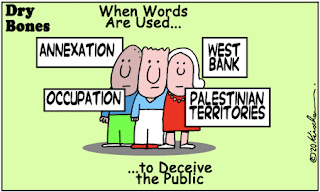 Students at Australia’s largest Jewish Day School – Moriah College – can be excused for being completely confused as to whether Israel’s proposed application of sovereignty in Judea and Samaria constitutes “annexation” or “restoring Jewish sovereignty” in the Jewish people’s biblical heartland after 3000 years.

There is a big difference – as College Principal Rabbi Yehoshua Smukler’s article “The myth of Israeli annexation” informed Moriah students:


“To use the term ‘Annexation’ in relation to Judea and Samaria is misleading. ‘Annexation’, a term applied to the forcible seizing of land or territory and annexing it into one’s own country or bringing it under its rule. It implies Israel is about to ‘seize control’ of areas that don’t already belong to Israel and that it doesn’t currently govern. This is simply untrue. Let’s look at the history.”

Regrettably the Principal’s look at history did not mention that:

Goot is Chairman of the Trustees and a Life Patron of Moriah College, Co-chair of the Policy Council of the World Jewish Congress (WJC) and a past President and current Deputy President of the Executive Council of Australian Jewry (ECAJ).


“What is Annexation?
Currently no country has recognised sovereign rights over any of the West Bank and therefore, in strict legal terms, the area cannot be annexed in the sense of one country seizing the land of another.
A unilateral act of this kind, which seeks to change the status of the West Bank, appears to be contrary to the Oslo Accords, which continues to bind Israel and the Palestinians equally.”

“We therefore declare that we cannot continue to be bound by these agreements [the transitional Oslo Agreement and its annexes, and the subsequent agreements signed with Israel] and that Israel must assume all of its responsibilities as an occupying power, because the status quo cannot continue and the decisions of the Palestinian Central Council last March are specific and binding.”

True to al-Maliki’s words – no such negotiations have occurred since.
Goot claims that the Mandate for Palestine – which recognised the historical connection of the Jewish people with Palestine – called for the “creation” – rather than the “reconstitution” – of the Jewish national home in Mandate territory.

Transjordan – 77% of the Mandate territory denied the Jewish people where 2½ of the 12 Tribes of Israel settled – gained independence in 1946 not 1923 as Goot claims.

Jewish schoolchildren should be focusing on Jewish sovereignty in Judea and Samaria becoming a modern-day miraculous reality after an absence of 3000 years.

Moriah students have – instead – become pawns in this political clash between two Moriah titans.

Author’s note: The cartoon – commissioned exclusively for this article—is by Yaakov Kirschen aka “Dry Bones”- one of Israel’s foremost political and social commentators – whose cartoons have graced the columns of Israeli and international media publications for decades. His cartoons can be viewed at Drybonesblog.