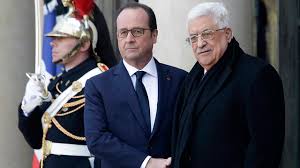 French foreign policy on resolving the Jewish-Arab conflict has been exposed to ridicule following France’s reported decision to postpone an international conference planned for December 21.

Originally proposed on 3 June – France’s blatant attempt to replace the conduct of direct negotiations between Israel and the PLO – as provided for in the internationally approved Oslo Accords and the Bush Roadmap – has embarrassingly fallen flat on its face.


“France has launched a two-phase initiative. A ministerial meeting, first, took place in Paris on June 3rd 2016, without the Israelis and Palestinians, in order to reaffirm the international community’s commitment to the two-State solution. At that meeting, the main international actors expressed their willingness to create a framework and incentives so that credible negotiations can resume. An international conference, to which all parties will be invited, will be organized in the second half of 2016 for this purpose.”

Surely it would have been much easier – and certainly much cheaper and more effective – for France to pick up the phone and invite both Israel and the PLO to Paris to sit down and resume their negotiations (stalled since 2014) without pre-conditions and outside foreign interference.

Israel’s Prime Minister Benjamin Netanyahu had publicly expressed his readiness to do so on many occasions – but PLO Chairman Mahmoud Abbas refused to indicate his willingness to do likewise.

The international community may well be concerned to see the two-state solution – the creation of a second Arab State in former Palestine in addition to Jordan – slowly sinking into oblivion.

However the way to resuscitate it was not by calling an international conference – but by threatening both parties with retaliatory action if they failed to meet somewhere at some nominated time and place.

Netanyahu made it very clear to France on 7 December that he would be willing to attend such a one-on-one meeting with Abbas if the conference planned for December 21 was cancelled.


“Prime Minister Benjamin Netanyahu spoke, by telephone, with French President François Hollande a short while ago today and told him that if there is no international conference in Paris, he would come to meet with Abu Mazen for direct talks without preconditions.

Israel will not attend an international conference, which will not contribute to achieving peace.”

France has the undoubted diplomatic and economic clout to influence Abbas – as the French Foreign Office acknowledges:


“France is an active contributor to Palestine’s economic development and the consolidation of the institutions of the future Palestinian State. It devotes considerable sums (close to €400 million for the period 2008-2014, and €40 million in 2015) to aid for Palestine, about a third of which is destined for Gaza. Palestine remains the leading beneficiary of French budgetary assistance.”

Why France’s President Hollande allows Abbas to humiliate France by refusing to take up Netanyahu’s offer is a mystery. France’s foreign policy itself is a pure flight of fancy – declaring:


“France considers that the conflict will only be resolved through the creation of a viable and democratic independent Palestinian State, living in peace and security alongside Israel.”

The idea that any Palestinian State will ever be democratic is as fanciful as France’s belief that its planned international conference could ever succeed.

There are solutions – other than the two-state solution – to end the 100 years old Jewish-Arab conflict.

Perhaps it is time France turned its attention to investigating alternative solutions  rather than pushing for a solution whose use by date has surely expired since first being proposed in 1993.