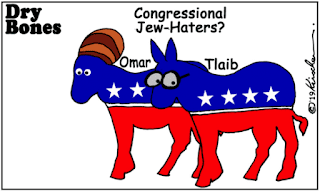 The Democratic Party House majority is now in freefall backing two of its openly-avowed Jew-hating members – Ilhan Omar and Rashida Tlaib – against decisions made by Israel banning them from unconditional entry into the Jewish State.

The Democrats leadership in the House issued the following statement on 11th February 2019 rebuking Omar for her antisemitic comments:


“Anti-Semitism must be called out, confronted and condemned whenever it is encountered, without exception.

“We are and will always be strong supporters of Israel in Congress because we understand that our support is based on shared values and strategic interests.  Legitimate criticism of Israel’s policies is protected by the values of free speech and democratic debate that the United States and Israel share.  But Congresswoman Omar’s use of anti-Semitic tropes and prejudicial accusations about Israel’s supporters is deeply offensive.  We condemn these remarks and we call upon Congresswoman Omar to immediately apologize for these hurtful comments.

“As Democrats and as Americans, the entire Congress must be fully engaged in denouncing and rejecting all forms of hatred, racism, prejudice and discrimination wherever they are encountered.”

Omar has never recanted or apologized.

The House condemned the Global Boycott, Divestment and Sanctions Movement (BDS) on 23rdJuly as one that:

Tlaib and Omar voted against this resolution which was overwhelmingly adopted by 398 votes to 17.

President Trump had no compunction in calling on Israel to ban them in this succinct tweet:


It would show great weakness if Israel allowed Rep. Omar and Rep.Tlaib to visit. They hate Israel & all Jewish people, & there is nothing that can be said or doe to change their minds. Minnesota and Michigan will have a hard time putting them back in office. They are a disgrace!

A specific Israeli law entitles Israel to ban Tlaib and Omar for supporting BDS – a Movement condemned by both Democrats and the House as abhorrent. No one – not even two US Congress members – should be above the law.

The Democrats and the House had – in taking their principled actions – provided sufficient justification for Israel to deny these two virulent Jew-haters entry into Israel. The Democrats should have been standing four-square behind Israel’s decision to exclude them.

The Democrats’ response to Israel’s decision – however – has been appalling.


“a sign of weakness, and beneath the dignity of the great State of Israel.”


“will only hurt the U.S.-Israeli relationship and support for Israel in America.”

Democratic Party leaders’ criticism of Israel’s decision could see large numbers of the 71 per cent of Jews who vote Democrat simply not turning up to vote at the 2020 elections.

The optics of the Democratic Party in being seen to be supporting two Jew-haters over Israel is not pretty – and will be repeatedly and mercilessly exploited by Trump in the 2020 election campaign.
The Democrats failure to stand with President Trump in supporting Israel’s decision has indeed played right into Trump’s hands.

Author’s note: The cartoon — commissioned exclusively for this article — is by Yaakov Kirschen aka “Dry Bones” — one of Israel’s foremost political and social commentators — whose cartoons have graced the columns of Israeli and international media publications for decades. His cartoons can be viewed at Drybonesblog