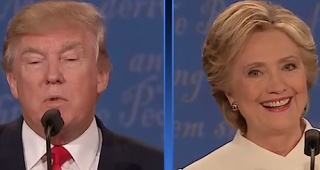 The presidential debates have signalled fundamental policy differences between Clinton and Trump on defeating Islamic State in Syria [ISIS].

Clinton will be pursuing policies that prolong Islamic State’s existence in Syria – until Mosul has been conquered in Iraq. Trump wants to defeat Islamic State in Syria as an immediate priority.

Clinton laid out her policies during the third debate:


1. “The goal here is to take back Mosul. It’s going to be a hard fight. I’ve got no illusions about that. And then continue to press into Syria to begin to take back and move on Raqqa, which is the ISIS headquarters.”

Conquering Mosul is going to take months to achieve – not to mention what Turkey might do if Mosul looks like falling in the current fighting.

Pressing into Syria to conquer Raqqa after Mosul’s fall would have to be undertaken without Syrian or United Nations Security Council approval – political insanity of the highest order that would certainly embroil the invading forces in conflict with Russia and Syria.

Great policies  –  if implemented in co-operation with Russia – but could result in a dangerous escalation in Syria with both Russia and Iran if undertaken unilaterally.


3. “And I’m going to continue to push for a no-fly zone and safe havens within Syria not only to help protect the Syrians and prevent the constant outflow of refugees, but to, frankly, gain some leverage on both the Syrian government and the Russians so that perhaps we can have the kind of serious negotiation necessary to bring the conflict to an end and go forward on a political track.”

Clinton is whistling in the wind if she believes these policies can place any leverage on Syria and the Russians whilst she is unilaterally trying to conquer Raqqa.

She herself acknowledged in the third debate that the establishment of a no fly-zone:


… “would not be done just on the first day. This would take a lot of negotiation. And it would also take making it clear to the Russians and the Syrians that our purpose here was to provide safe zones on the ground.”

Presumably Syria would continue to burn whilst President Clinton negotiated with President Putin.

1. He recognised the current problem:


“… our country is so outplayed by Putin and Assad, and by the way –  and by Iran. Nobody can believe how stupid our leadership is.”

2. He identified America’s present precarious position as a result:

3. He enunciated his policy in the second presidential debate:


“ I believe we have to get ISIS. We have to worry about ISIS before we can get too much more involved. “

4. He had previously made clear the way forward:


“Wouldn’t it be nice if we got together with Russia and knocked the hell out of ISIS?”