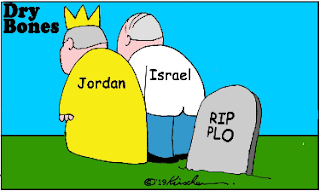 Sharon warned against granting autonomy to West Bank Arabs – something that occurred in 1993 after Oslo Accord I was signed and 95 per cent of the West Bank Arabs came under PLO administrative control:


“We must face a simple fact. Autonomy will inevitably lead to Palestinian statehood. The self-governing Authority will enjoy international recognition and command universal attention. Every self-respecting state will open a mission there.

Journalists will coo over keffiyeh-wrapped PLO murderers glowing with a romantic halo. The chairman of the Authority will sit in his office adorned with a wall to wall picture of another chairman, arch-murderer Yasser Arafat. And there will be a PLO flag in the front of the building.”

27 years later, autonomy has not translated into statehood – due to the PLO’s racist policy of refusing to accept the right of Jews to live in the West Bank – the ancient biblical, historic and legally-designated heartland of the Jewish people.


“… The true solution is to recognize that Jordan is the Palestinian state. Only with Jordan should we discuss the future of the Arab inhabitants of Judea and Samaria, all of whom are Jordanian citizens. And it is with Jordan that we should discuss granting this kind of citizenship to Gaza residents.

We must also talk about how they will vote for and get elected to the Palestinian parliament in Amman, how they will pay taxes, and how they will be able to use Haifa and Ashkelon harbors and reciprocally, how we can use Akaba.

And we should talk of a common market in the Middle East, and about water projects and the mutual development of the Dead Sea resources and of a common front against Arab terrorism. Whether King Hussein or anyone else heads the Palestinian State, Jordan, is their decision.”


“What I suggested in the past and I suggest again, is that there be autonomic regions without territorial contiguity. Their local police will act strictly within these regions. Non-Jews, after all, have no problem traveling on roads under Jewish control: the problem exists only for Jews under non-Jewish control.

Israeli sovereignty will then begin in all the zones in which Jews are settled. This will affect contiguity of Jewish areas from the Mediterranean to the Jordan River in Judea and Samaria, and from the Sea to the Western Negev in the Gaza district.

Thus all Jewish communities will be under Israeli sovereignty, while most of the Arab population will live in autonomous districts.”

Trump’s US$28 billion economic plan for the West Bank and Gaza has been rejected by the PLO and received with little enthusiasm by Jordan.

Jewish ethics provides sage advice to Trump to present his political plan without further delay – irrespective of how the PLO and Jordan might receive it:


“It is not your responsibility to finish the work, but you are not free to desist from it either.”

Will Trump’s proposals – like Sharon’s – also bury the PLO and resurrect Jordan in the West Bank?

Author’s note: The cartoon — commissioned exclusively for this article — is by Yaakov Kirschen aka “Dry Bones” — one of Israel’s foremost political and social commentators — whose cartoons have graced the columns of Israeli and international media publications for decades. His cartoons can be viewed at Drybonesblog