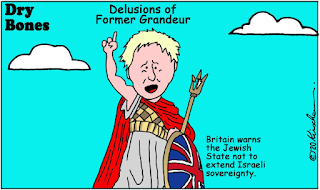 Britain – the architectof the San Remo Resolution and Treaty of Sevres in 1920 that led to the League of Nations Mandate for Palestine in 1922 – has yet again shamefully betrayed the Jewish People by warning Israel not to extend its sovereignty into Judea and Samaria.

Britain’s Prime Minister Boris Johnson has told Israeli Prime Minister Benjamin Netanyahu that any such action would be in violation of international law – which Netanyahu disputes – despite the Mandate vesting in the Jewish People the right to “close settlement” in Judea and Samaria for the purposes of reconstituting the biblical Jewish National Home in what had been the heartland of the Jewish People 3000 years ago.

Britain had betrayed the Jewish People in 1950 after all the Jews living in Judea and Samaria had been ethnically cleansed by the invading Arab army of Transjordan in 1948.  Britain – supported only by Pakistan and Iraq – recognised Transjordan’s illegal annexation of Judea and Samaria, the renaming of the newly merged entityas “Jordan”whilst “Judea and Samaria”was renamed“West Bank”.


“I am immensely proud of the UK’s contribution to the birth of Israel with the 1917 Balfour Declaration.  But it will remain unfinished business until there is a solution which provides justice and lasting peace for both Israelis and Palestinians.

The only way it can be achieved is for both sides to return to the negotiating table.  That must be our goal. Annexation would only take us further away from it.”

Peace for both “Israelis” and “Palestinians”?

There were only “Arabs” and “Jews” in 1917. The Arab residents of Palestine then comprised part of “the existing non-Jewish communities”.

Johnson’s warning to Israel is the complete antithesis of what he wrote on 29 October 2017 as Foreign Minister – ahead of the Balfour Declaration centenary on 2 November:


“I have no doubt that the only viable solution to the conflict resembles the one first set down on paper by another Briton, Lord Peel, in the report of the Royal Commission on Palestine in 1937, and that is the vision of two states for two peoples.”

The Royal Commission was authorised by Royal Warrant dated 7 August 1936 which did not mention  the “Palestinians” – only naming two parties – the “Arabs” and the “Jews” – not three – as disputants.

The Peel Commission after a lengthy and detailed Inquiry concluded that:

The Arabs rejected this decision.

The Jews disputed the boundaries.

Trans-Jordan in 1937 then comprised the remaining 78% of the Mandate territory closed byBritainto Jewish settlement under Article 25.

Jewish settlement in Judea and Samaria however was to be facilitated and encouraged under article 6.

The PLO’s outright refusal to negotiate with Israel on President Trump’s Peace Plan strengthens Netanyahu’s decision to restore Jewish sovereignty in 30% of Judea and Samaria after 3000 years. Johnson’s hypocritical posturing should reinforce  – not weaken – Netanyahu’s resolve.

Author’s note: The cartoon –commissioned exclusively for this article—is by Yaakov Kirschen aka “Dry Bones”-one of Israel’s foremost political and social commentators –whose cartoons have graced the columns of Israeli and international media publications for decades. His cartoons can be viewed at Drybonesblog.