Once again, the media is pushing fake news.

We’ve already discussed how the New York Times misrepresented the words of David Friedman about how Israel would ultimately keep parts of the West Bank as claiming that he tacitly supports “annexation” of the territories.

Yesterday, Jason Greenblatt, speaking at the Jerusalem Post conference in New York, said, “I will let David’s comments stand for themselves. I think he said them elegantly and I support his comments.”

The Times of Israel reported this as if Greenblstt also supports unilateral annexation, editorializing, “In an interview published by the New York Times last Saturday, Friedman suggested that some degree of annexation of the West Bank would be legitimate.” 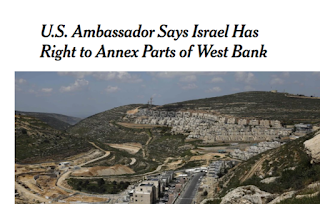 What TOI didn’t bother reporting is that Greenblatt said explicitly to look at Friedman’s words, not the New York Times headline – which was a lie.

And then it quotes Friedman saying no such thing. “Under certain circumstances, I think Israel has the right to retain some, but unlikely all, of the West Bank.”

Isn’t that exactly what every peace plan since Clinton has said? No one is talking about annexation – they are saying that under any possible agreement, Israel will hold on to some part of the territories, and there might be some land swaps.

Even Jimmy Carter said the exact same thing. Visiting the “settlement” of Neve Daniel in 2009, he said, “This particular settlement is not one that I envision ever being abandoned, or changed over into a Palestinian territory. This is part of the close settlements to the 1967 line that I think will be here forever.”

Did Carter say he supported annexation? Not at all, and neither did Friedman or Greenblatt. All of them are talking about Israel retaining territory under a peace agreement.

The false reporting in the New York Times has already spawned J-Street mailings, Palestinian condemnations and a riot at the Gaza border. This is not the first time that the NYT has ascribed motives to newsmakers that align to their own wishful thinking than to their actual words.  Irresponsible journalism is not innocuous – it could cost people’s lives.