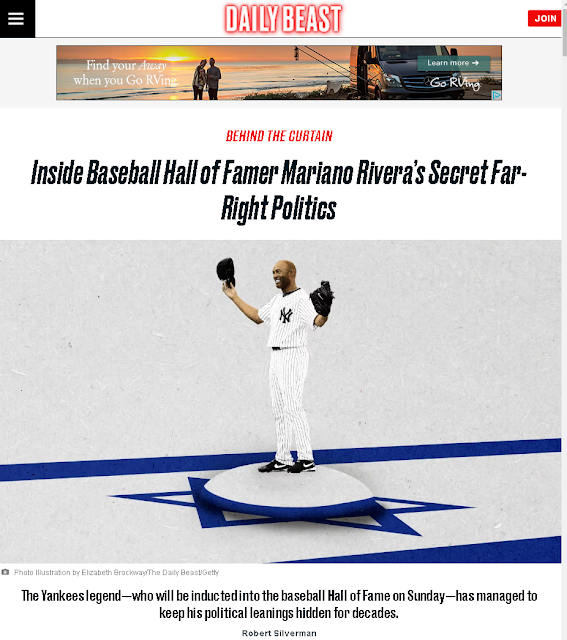 This article in The Daily Beast by Robert Silverman is truly remarkable in how much it tries – and fails – to tar the greatest relief pitcher of all time as a bigoted, far-right racist.

Over the past three years, [Rivera’s] served at the pleasure of a racist president, taken part in thinly veiled propaganda on behalf of an apartheid government in Israel, and gotten chummy with outright bigots and apocalyptic loons. None of this will be inscribed on his Hall of Fame plaque. It should, even if much of the sports world would very much like to pretend none of it exists.

The article then goes into detail about these accusations, and ends up with nothing more than guilt by association with people whose views the author finds odious, again without proof.

The illustration of Rivera on a yarmulka/pitcher’s mound with the Israeli flag is actually perfect for this article – nothing but insinuation, zero facts, and showing how biased the author is.

Let’s start off with Silverman’s “proof” that  Israel is an apartheid state. He links to an about a document released by a UN commission made up exclusively of 18 Arab states, because whatever Arabs say about Israel must be true. He doesn’t mention that the document was not accepted by the UN and the person who wrote it was forced out of her job for making that accusation without clearing it with her UN bosses.

I’m not going into whether Trump is racist (I don’t believe he is although he is too willing to use racist dog whistles to help his political aims) but to imply that everyone who does anything for Trump is a racist is something that any decent editor would throw back in the face of the writer.

Look at the doggerel in the article:

Rivera insisted he would retire from baseball in 2003 in order to focus on evangelical work; “Phil. 4:13″, referring to Philippians 4:13, was scribbled on his cleats; the year he retired, Rivera’s charitable organization, one very much powered by his faith, was distributing nearly a million dollars annually, according to New York magazine; he recently founded a church in New Rochelle, NY (his wife serves as pastor); when Rivera gave up the game-winning single that cost the Yankees the 2001 World Series, he said it was part of the greater good—God’s plan, even—because doing so prevented a teammate from possibly getting on a plane that crashed; and when it comes to his signature pitch, “He put it in me,” Rivera said. “He put it in me, for me to use it. To bring glory, not to Mariano Rivera, but to the Lord.”

But the vast majority of Evangelical Christians also believe in a particular messianic biblical prophecy: Jews must rule the Holy Land before Christ can return. Whether Rivera ascribes to those beliefs entirely is unclear, but his support for Israel and the Israel Defense Forces is a matter of public record. He has traveled to Israel on multiple occasions, possibly beginning in 2013.

Wow. Silverman has proven that Rivera is a devout Christian and supports Israel. Which is, of course, unforgivable to Silverman.

It gets more absurd:

[A]ccording to the NYBR {New York Board of Rabbis]  executive vice president, at one point they were in the Golan Heights. Gesturing toward Lebanon and Syria, which were visible from where they stood,“They could have a much better life and yet they choose not to take that path,” the rabbi claimed Rivera told him. “There’s an ideology that infects their thinking, and they just don’t want to live in peace.”

If Silverman has evidence that Syria and Lebanon want peace with Israel, he should stop writing about baseball and publicize that. He could win a Pulitzer.

While there, Rivera said the IDF trains soldiers to be “a better person, a better citizen, and a better human being,” according to a statement put out by the FIDF. Two-and-a-half months earlier, Israeli soldiers killed at least 60 Palestinian protesters in Gaza and injured thousands more.

Of whom nearly all those killed were Hamas and Islamic Jihad terrorists.   But isn’t it better just to call them “protesters?”

The entire article has not a single fact to prove its point. All it has is loose linkages of Rivera with people and organizations that Silverman has an obsessive hatred for but who aren’t close to what Silverman claims they are.

In the end, Silverman is upset that a successful athlete is pro-Israel and a proud Christian, which proves that the only bigotry in this entire article comes from the author.