For the festival of Shavuot which starts tonight, many Jews will be eating cheesecake and other dairy foods. This tradition marks the giving of the laws on kashrut alongside the ten commandments on Mount Sinai. But not all Mizrahi Jews eat dairy foods, some put the accent on fruit, cereals and grain – as Shavuot also celebrates the harvest and the first fruits. Mocha Juden has a useful round-up:

Jews of Persia: In her book, “Jewish Cooking from Boston to Baghdad,” Malvin W. Liebman uncovered some interesting research about Persian Jewish eating on Shavuot. She writes that the holiday symbolized the marriage of God and the people of Israel to the Jews of Persia, so they prepare for it like a wedding, serving grain and cereal dishes, fruits and sweets.

Iraqi Jews: Kahee, a food made from a dough which has been rolled flat, buttered, folded into squares and fried then sprinkled with sugar on top, is eaten for Shavuot by Iraqi Jews.

Tunisian/Moroccan/Libyan Jews: Some Tunisian and Moroccan Jews eat a seven-layer cake called sieta cielos (seven heavens) for Shavuot. It represents the seven spheres of God, passed in order to present the Torah to Moses. Jews from Tripoli make various shaped wafers for Shavuot. Some like a ladder, others like a hand and others like two tablets. Moroccan Jews recite the Kiddush on Shavuot eve they take a few pieces of Matza that they saved from Passover and break them into small pieces. They then make a mixture of honey and milk. Immediately after, they blend the Matza pieces into the mix. Everyone gets their own portion, savoring the taste of this Shavuot treat. 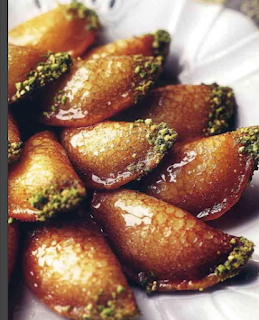 Greek /Turkish/Balkan Jews: Greek and other Sephardic communities serve cheese pastries and pies and delicacies based on cheese, eggs, milk and yogurt for their main meals during Shavuot. They also bake special breads with symbols on the surface of the bread such as a mountain like Mount Sinai, tablets of law, a scroll with pointing hands, Jacob’s ladder, a well in the desert or a serpent. Roscas, sweet yeast bread rings, sometimes braided, called tsoureki in Greek, are also served with cheeses for Shavuot, along with bougatsa, a cheese-filled phyllo pastry.