Under the heading “To our fellow British citizens”, a heartfelt plea from the current issue of Anglo-Jewry’s oldest extant newspaper, the Jewish Chronicle, edited by Stephen Pollard: 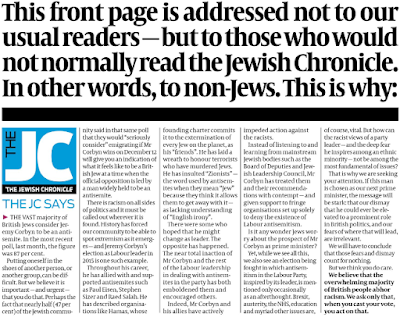 Meanwhile, a prominent rabbi,  Jonathan Romain of Maidenhead Reform Synagogue,  has written to his congregants as follows:


“I am writing to all members of the community regarding the forthcoming election. In past elections, never have I dreamt of suggesting which way one should vote. This election is different.

You may recall the ground-breaking decision of all three Jewish newspapers — The Jewish Chronicle, The Jewish News and The Jewish Telegraph – to publish exactly the same front cover on 25th July 2018: taking a united stance to suggest that a Labour government under the leadership of Jeremy Corbyn would prove “an existential threat” to British Jewry.

You may recall the Deputy Leader of Labour, Tom Watson saying he was “ashamed” of Labour being guilty of racism, or the fact that the Equalities and Human Rights Commission (EHRC) are currently investigating accusations of racism against Labour, the first time they have done so against a political party since their enquiry into the British National Party.

You may recall the Labour MP of 49 years, Louise Ellman, resigning in October 2019, because, as she put it: “Labour is no longer a safe place for Jews and Corbyn is a danger to the country”.

These are just a handful of examples from the last three years that make me feel that normal political allegiances are superseded by the unprecedented situation we face.

I should stress that the problem is not the Labour Party itself, which has a long record of fighting discrimination and prejudice, but the problem is Jeremy Corbyn. Corbyn-led Labour, has, at best, let anti-semitism arise within its ranks, or at worst, has encouraged it.

This has never happened under any previous Labour leader, whether under Tony Blair on the right, Neil Kinnock in the centre or Michael Foot on the left, so the finger of responsibility really does seem to point to Jeremy Corbyn

I am therefore suggesting we should each put aside all other considerations and vote for whichever party is most likely to defeat Labour in whatever constituency we are in – even if we would never normally vote for that party.

If you, too, think that a Corbyn-led government would pose a danger to Jewish life as we know it…whether it be utterances that cause Jews to feel victimised, less secure and no longer at ease…or maybe even legislation that restricts Jewish life or relations with Israel in some way, then you may wish to vote to ensure Labour does not gain your local seat. Do not discount the power of your vote – many seats are won or lost on small majorities – while the issue of Brexit means that very different voting patterns will probably take place compared to previous elections … so do not assume that a safe Labour seat will remain Labour, or that Labour might not win a seat that previously looked safe for another party.

Please feel free to share this with any family, friend or colleagues you think might feel the same.

Let me repeat that this is suggestion I would not normally make but for the Corbyn-factor — and you are at liberty to disagree totally with my point of view. I appreciate, too, that you may feel that other criteria take priority when voting. You should vote as your conscience dictates …while if you wish to discuss this with me, feel free to do so.”


“We are less than five weeks before another early general election in the UK.

In the past I have steered clear of party politics as I saw it conflicting with my Rabbinic service to the community. However, there are times when involvement in politics is inevitable, especially when the welfare of the community is at stake. In writing to you now I have taken a great deal of courage and inspiration from my colleague and teacher Rabbi Jonathan Romain, who wrote in similar terms to his Maidenhead Reform community a week ago.

Since Jeremy Corbyn’s assumption of Labour leadership, the attitude of the party towards British Jews has changed dramatically, and the party has become riddled with antisemitism.

Ken Livingstone, a senior member of Labour and former Mayor of London claimed in 2016 that the Zionists collaborated with the Nazis. It took Labour two years to discuss his expulsion from the party. He resigned from the party before a decision was taken.

Jackie Walker, one of the founders of Momentum and a prominent member of the party, has accused Jews of financing the slave trade, and called for the abolition of Holocaust Memorial Day.

Labour members have been responsible for spreading anti-Semitic conspiracy theories, such as calling Jewish members of parliament ‘Zionist infiltrators’, and blaming ‘Israeli Jews’ for the September 11 terrorist attacks. These Labour members were not suspended – let alone expelled from the party.

Jewish Labour members of parliament were and are under immense pressure for fighting antisemitism. Luciana Berger, who was a life-long member of Labour and a Labour MP for nine years, recently resigned from the party, asserting that under Corbyn, Labour was plagued with “institutional anti-Semitism”. I fully support her view.

Antisemitism in Labour is also affecting local politics. In the past there have been calls by local Constituency Labour Parties for enquiries into “improper Israeli interference into domestic politics”. More recently there was an invitation to the Jewish Voice for Labour network to conduct antisemitism training for local activists. Jewish Voice for Labour is far from representing the Jewish community, and in fact claims that allegations of antisemitism are merely a smear campaign against Labour.

These are just a few examples, a drop in the ocean of the anti-Jewish behaviour plaguing the Labour party since the change of leadership.

I would like to emphasise that there are many in Labour who do not share these values, and many who are dedicated to fighting inequality, racism and prejudice. The problem lies with Jeremy Corbyn and the present Labour leadership who tolerate and allow antisemitism to rise from within its ranks.

I would therefore like to join the call made by my colleague Rabbi Romain. If you too believe that a Corbyn-led government would be detrimental to Jewish life as we know it, you should put aside all other considerations and vote for the party that is most likely to defeat Labour in your local constituency. Do not discount the power of your single vote as in many constituencies seats are won or lost on small majorities.

Please feel free to share this with any family, friend or colleagues you think might feel the same. You are welcome to contact me … should you, or others, wish to discuss the content of my letter.

Here, as well, is a certain marvellous lady, of perspicacity and courage sans pareil: