There have been a number of articles by Jews lately saying that this is not the time to worry about the anti-Israel platform of Black Lives Matter because solidarity with blacks over the murder of George Floyd is far more important.

The morning after I saw the video of George Floyd’s death-by-police, I gave a small donation to Black Lives Matter (BLM) and shared a link on social media encouraging friends to do the same. A fellow member of my temple’s Tzedek Council took exception. He declared that while he supports the cause of ending police brutality against African Americans, he couldn’t in good conscience contribute to BLM because of their support of the boycott, divestment and sanctions movement (BDS), and condemnation of Israel.

…But Jews need to support black people, BDS or no, because… well, “First they came for the Blacks and I did nothing.”

I believe in equality and equity. I fight against racism. I believe every human being is created in God’s holy image. And yet, I previously grimaced when I heard the rallying cry “Black Lives Matter.” I grimaced really for one reason only: the stance the Movement for Black Lives platform took on Israel back in 2016. The comprehensive document referred to Israel as an “apartheid state” and condemned the United States for its “alliance with Israel and [being] complicit in the genocide taking place against the Palestinian people.” Such rhetoric broke my heart.

For the past four years, every time I saw a “Black Lives Matter” placard, I shuddered at the anti-Zionist and anti-Semitic themes it raised for me.

…In 8 minutes and 46 seconds, the world changed. Now it is on us to make certain that George Floyd’s death will not be in vain. We can argue and joust and cry about Israel another day. Today, we have a categorical moral imperative to hear the pain of our black brothers and sisters. We have to recognize the holiness in their struggle and their plight. And I know in my heart of hearts that I have to stand with them. We have to stand with them. And so now and evermore we must all say Black Lives Matter.

Another article, with a much stronger point for supporting BLM, at Hey Alma: 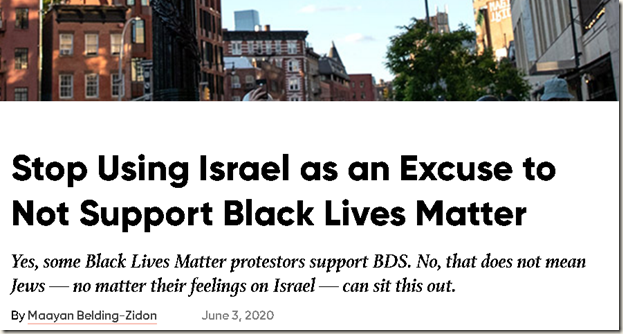 Far more common than those who denounced Black Lives Matter outright, though, were those who silently took a few steps back from the movement. You know who you are. You know that there’s racism in America; you’re against it, obviously, but you really, really don’t want to get into an internet fight about Israel.

Maybe you’re a college student who feels alienated by the BDS (boycott, divestment, and sanctions) activism on your campus. Maybe you’re a proud Zionist who deleted Dua Lipa’s new album from your Spotify library after she reposted an anti-Israel screed. Maybe you haven’t thoroughly thought out your position on the Israeli-Palestinian conflict, and you’re just sick of people expecting you to take sides just because you’re Jewish. Whatever the reason, you’re one of those people who just wouldn’t be comfortable rolling up to a Black Lives Matter protest with your Star of David necklace out, knowing that you might run into someone holding a Palestinian flag.

I see where you’re coming from, I really do. And I’m here to tell you that you need to show up anyway.

I am an Israeli citizen and a proud Zionist. I oppose BDS because I believe full civil rights and security for Palestinians will only be achieved through Israeli-Palestinian dialogue and trust-building. By the same token, I cannot refuse to engage with Black Lives Matter. The history of racism and white supremacy in the United States is violent and painful, like that of Israel and Palestine. No American of good conscience can simply opt out of racism in America — no more than Israelis can simply ignore the existence of Palestinians, or vice versa.

All of these articles are conflating genuine fighting for equality and justice with the organization called “Black Lives Matter.” They say that the fight against racism is too important to let the BLM’s anti-Israel platform be an impediment.

But BLM did insert bigotry into its platform. It actively opposes the rights of Jews to exercise self-determination, the right to defend themselves, the right to be treated like other peoples.

In a world where a single unthinking politically incorrect comment can get people to lose their jobs, why is anti-Israel bigotry the exception that we are asked to overlook? Why do Jews have to be the ones who rise above being the objects of hate but no one else is expected to?

Attend the protests. Wear your Star of David necklace. Brandish the signs that say Jews support black lives.  There is nothing wrong with marching with those you disagree with on a cause you have in common.

But keep your self-respect. Don’t say that we can ignore the bigotry of BLM or can push that topic off to another day. Bigotry is the topic, and supporting BDS is bigotry. Even if 99% of the BLM platform is wonderful, that 1% poisons the entire thing and should never be accepted or excused.

If the Israel issue does come up, don’t get defensive. Show pride. Point out that it makes sense for blacks to partner with Jews who know a thing or two about rising from slavery and genocide to becoming a proud people living their own lives in their own land, who unapologetically defend themselves against the antisemites and bigots, who know that antisemitism and racism will never disappear but have the most experience in effectively fighting the hate.

Israel is the real life Wakanda. That is the message that needs to be shared.

Jewish pride means that no one should donate to, or write articles supporting, an organization that is bigoted against Jews who support a Jewish state.

Black lives do matter. But Black Lives Matter cannot be condoned as long as it practices the type of bigotry it is ostensibly against.